Lung Disease & Stem Cell Therapy: What You Need to Know 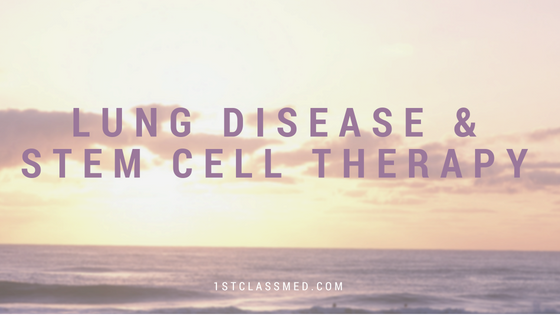 COPD and Other Lung Diseases

Chronic Obstructive Pulmonary Disease (COPD) is a lung disease where the lungs become inflamed, damaged and possibly narrowed. The main cause of COPD is smoking, but some patients have never smoked.

Pulmonary Fibrosis (PF) is a chronic and progressive lung disease where the alveoli become scarred and stiff, making it hard to breathe and get oxygen into the bloodstream.

Cystic Fibrosis (CF) is a genetic disorder that affects the lungs mainly. It causes difficulty breathing and coughing up mucus that may lead to lung infections.

Asthma is a long-term lung disease that affects the bronchial tubes, causing them to become inflamed. This in turn causes the individual to struggle breathing.

Individuals with pulmonary fibrosis, cystic fibrosis, asthma and COPD may have one more option to combating their disease.

Researchers at University of North Carolina Health Care have moved closer to a treatment for individuals with lung diseases by fighting the dying/infected stem cells in the lungs.

Two recent studies that UNCHC has shared with the public have showed successes in using stem cells in order to regenerate the lungs.

The first study demonstrates that it is possible to isolate stem cells, nonetheless it is a moderately non-invasive procedure.

The second study helped to reduce fibrosis in rats that suffer from pulmonary fibrosis, by using stem cells. Both studies are another step closer to assisting lung disease patients by regaining their ability to breathe better.

Back in 2015, the same group of researchers found in the first study that lung spheroid cells (lung tissue that formed a sphere-like shape) have the possibly to regenerate new cells.

They originally tested their theories on animals with lung diseases and saw better results than with other forms of stem cells.

Recently trying their spheroid cells on lung disease patients, they withdrew the cells from the patient by transbronchial biopsy.

A Transbronchial biopsy is a “seed-sized” sample, removed from the airway tissue with a bronchoscope.

The researchers then use this small tissue sample to get the patients stem cells and multiply them. As most treatments with stem cells, this treatment needed millions of cells, which is why the researchers needed the cells to multiply.

From there, the researchers discovered while injecting mice with cells, the cells then traveled to the lungs.

Dr. Cheng, who lead the study believes that “These cells are from the lung, and so in a sense they’re happiest, so to speak, living and working in the lung”. This allows researchers to provide a less invasive option for patients.

What could be the most exciting part of this study, is when they tested a common irritant that triggers pulmonary fibrosis and successfully the rats did not have an attack.

The new spheroid cells helped create new cells, which in turn, helped a reduction in inflammation and fibrosis.

The research also showed no issues with a negative immune reaction. Even though the cells were taken from another individual, may it be human or rat, and given to the recipient, the cells took.

There was no negative immune reaction in the recipient, even though tissue normally can cause a negative reaction.

Currently the research group is conversing with the U.S. Food & Drug Administration, in hopes of starting to use humans in their studies come the end of this year. According to the researchers, the hopes would be to have a small group of pulmonary fibrosis patients for the testing.

Their long-term goal is to open up a universal cell donor bank, similar to how a blood bank would run.

He went from 4-6 breathing treatments a day, to less than one every few months.

According to his doctor, Dr. Johnson, he withdrew a small amount of fat via liposuction, and then separated the stem cells in a centrifuge.

Dr. Johnson then mixed the separated cells with a solution and then given back to the patient via intravenous therapy or breathing treatments.

Research Outside the U.S.

In another turn, the UK is also working more on stem cell research, more focused on COPD and asthma.

The National Heart and Lung Institute (NHLI) has published research showing the use of stem cells can minimize the effects of COPD and similar lung diseases.

When starting their research, they exposed cells from human lungs to cigarette smoke. They realized that the cigarette smoke damaged the cells, and caused them to become less effective at producing energy and inevitably would start a process called apoptosis or cellular suicide.

This is where the cells would begin to program their own death.

The research carried out by the NHLI with Imperial College London and Hong Kong University discovered that the mitochondria (the part of cells that produces energy, the “power-house”) in healthy cells would migrate to the damaged cells in a patient’s lungs and begin to repair the cells.

This allows the cells to begin the function properly again.

Professor Chung, who lead the research, wants to build up more evidence to prove that stem cell therapies work.

This research could help start the conversation between researcher, doctors and patients alike about the possibilities that stem cell research could provide for individuals that need them.

What Does This Mean for Me?

Though most of the research isn’t open to human participation yet, researchers are getting close.

With minor stem cell therapies now an option, the therapies that are proving most effective won’t be available for a few more years.

There are a handful of companies out there who are providing these therapies before enough research has been done to prove it is safe.

We would recommend doing your research first, and making sure the companies offering these services and volunteer studies are proven safe and are registered through the National Institutes of Health (NIH), and FDA approved.

You also have the option to volunteer for the studies being conducted, you would just need to get in contact with a research group running studies and see if you qualify.

Be aware, volunteering for a research study can also be more harmful to your health.

Take all risks and warnings given by the study seriously, your health and wellbeing are most important.

Many of those studies have not been reviewed by an expert researcher or a professional in the field. We also recommend looking into if the study has been looked at by a regulatory agency.

Due to the very high risk of unauthorized or unapproved stem cell study (or company), look into the credibility, reliability and objective sources.

Your health is the most important and a very risky procedure that has not been reviewed by a professional in the field is a risk.

Most importantly, speak with your doctor, respiratory therapist and medical team to make sure volunteering for a research study or getting stem cell therapy is the right fit for you and your condition.

Making sure it is safe for your health is the most important part. These studies are still new in their research stages and can be more harmful than helpful if you are not careful.

For more information, or if you have any questions we recommend looking at clinicaltrials.gov, as this lists approved clinical trials in the US and Canada through the National Institutes of Health (NIH).

Or you can call the American Lung Association HelpLine (1-800-LUNGUSA) if you have any additional questions about stem cell treatments.

With new advancements in lung stem cell research, there is a lot of hope for the future of lung diseases.

More importantly, it is giving an option to lung disease patients who may not have had a solution before.

Hopefully in the next couple of years it offers a new chance to those with lung diseases.