Unlike other chronic lung diseases such as COPD, cystic fibrosis isn’t a disease that develops over time. Instead it is a lifelong, hereditary disease that affects your lungs, pancreas and other vital organs due to thick and sticky secretions. The secretions are thin and slippery like a lubricant in a healthy patient, but a defective gene causes mucus and digestive juices to become thick and sticky. Resulting in clogged airways and digestive passageways. When cystic fibrosis (CF) was first being diagnosed during the 1950’s, patients rarely reached the age to go to elementary school. Progress is shown in treatments as in 1985 the average lifespan of patients was 25. As short ago as 2007 the diagnosis of cystic fibrosis meant patients still had a limited life span, but with cutting edge research efforts doctors have been able to extend the life expectancy of patients dramatically to a median age of 40.7 (cff.org). With proper treatment and disease education, patients can still attend school, work and have a high quality personal life.

The difficulties cystic fibrosis poses for your lungs is mucus, which in a healthy person acts as a slimy lubricant, but the thick mucus associated with CF blocks the airways making breathing increasingly difficult which then results in serious and harmful lung infections. In 90% of patients with CF, the airways are affected. The pancreas is also harshly affected, the thick sticky mucus blocks the passageways to the digestive system which interferes with proper digestion and results in malnutrition.

The following are statistics from the Cystic Fibrosis Foundation for the most recent patient data from 2013: 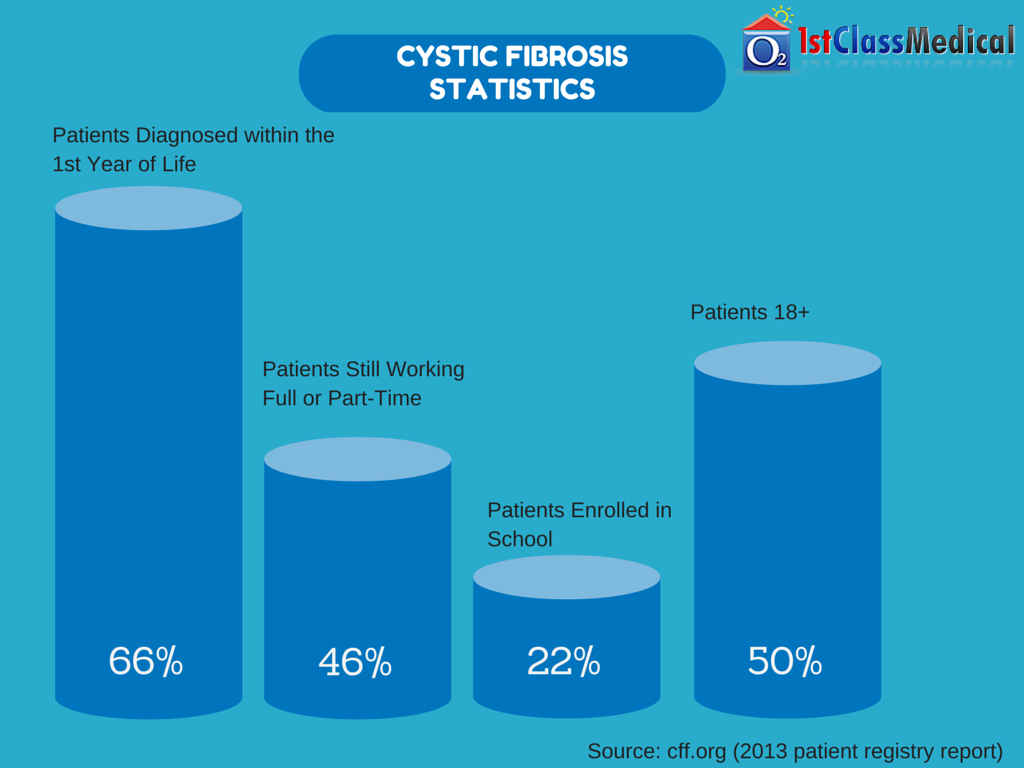 Cystic fibrosis isn’t more prevalent in male or females, both are at an equal risk of inheriting this genetic defect. While Caucasians experience the highest occurrence of CF at 86.8% of the total community, with only 4.3% of the community being African American and 7.9% being Hispanic in 2013. - Cff.org

You may have a quick question that needs answered, but calling your doctor’s office and waiting for them to call back may take some time. To answer those questions or concerns quickly, you can visit one or all of the following authoritative CF resources:

The Causing Factor of Cystic Fibrosis

As previously said, cystic fibrosis is not a disease that develops after long-term exposure to smoking or other lung irritants. Instead it is a hereditary disease passed on from your parents. In the occurrence of CF, patients have a genetic mutation (defect) in a gene that causes a change in a protein that is responsible for adequately regulating the movement of salt in and out of cells. This then causes the normally slimy and thin mucus to become thick and sticky, which will then clog the respiratory, digestive and reproductive systems. While also increasing the concentration of salt in sweat. Many varying types of mutations can occur within the gene, but the type of gene defect is directly attributed to the severity of the disease.

The felt symptoms of cystic fibrosis depend highly on the severity of the disease, you may even notice your regular symptoms worsen or get better with time. Which is why only some children experience related symptoms in their infancy, while others don’t begin experiencing symptoms until their teens or even adulthood.

Through advocacy and proven research, every newborn in all 50 states is now tested for cystic fibrosis before symptoms arise to provide treatment from day 1. Though if you were born before the regular newborn tests, it is important to recognize the symptoms and get tested sooner rather than later. One of the major signs of CF is an excessive level of salt in you or a loved one’s sweat. You’ll often be able to taste it when you give them a kiss. The rest of the symptoms are related to the respiratory and digestive systems.

Due to the thick and sticky nature of your mucus attributed to cystic fibrosis, the tubes or airways that carry oxygen to and from your lungs become clogged. Resulting in the following symptoms:

Not only does cystic fibrosis affect your respiratory systems ability to function properly, but the thick mucus of CF also affects and clogs the passageways that carry digestive enzymes from your pancreas to your small intestine. The lack of these enzymes inhibits your intestines ability to fully absorb important nutrients from the food you eat, leading to the following symptoms:

The end of the large intestine, rectum, can protrude from the anus due to strain while passing stool (rectal prolapse). The occurrence of this in children may be a sign of cystic fibrosis, and parents should consult with a doctor about getting their child tested. Rectal prolapse in children may require surgery.

Living with CF is tasking, and as a CF patient you need a 25-50% higher caloric intake than a healthy person. You will also need 50% more protein than others your age. Additional calories shouldn't be consumed through sugary drinks or fatty foods. Instead you should cook fresh veggies, lean meats, chick, poultry and fish. Whether it's you or a loved one diagnosed, 3 meals a day with 3 snack in-between are generally recommend for a healthy disease conscious diet.

Complications that May Arise with Cystic Fibrosis

The most common complications associated with cystic fibrosis occur in the digestive, respiratory and reproductive systems due to a build up of thick and sticky mucus. If you experience any of the following complications, you should immediately bring them up to your doctor to begin seeking treatment options before they escalate.

A visual representation of bronchiectasis

Currently there is no definitive cure for cystic fibrosis, though there are ample amounts of treatment avenues your doctor can take that will reduce felt symptoms so you can be a more active, healthier and happier you. Treatments can vary from medications to specific therapies that target and strengthen your respiratory system. Depending on your exact condition your doctor may recommend one or many of the following CF treatment options.

Typical medications your doctor may prescribe to treat CF include:

To help loosen up the thick and sticky mucus in your chest, your doctor may recommend a few chest physical therapies that will make it easier for you to cough up and expel mucus from your body. A popular and highly used technique you doctor will talk about is chest clapping, which is where you “clap” both the front and backside of your chest with cupped hands to help loosen up mucus. For the best results, this should be done 1-4 times per day.

In addition to clapping with cupped hands on your back to break apart mucus, mechanical devices have also been developed and used to help loosen mucus in your chest which include:

One of the most beneficial tools for patients with cystic fibrosis that your doctor may or probably has recommended is getting enrolled in a pulmonary rehab program. These programs are typically on an outpatient basis and are long-term, during the program you will be equipped with tools and knowledge that will improve your stamina, overall happiness and most importantly lung function. During the entire program you will have a dedicated team of medical specialist to answer any questions or concerns you may have along the way. Pulmonary rehab programs include:

WOW! What an incredible amount of useful information. Now it’s up to you what you do with it. Living with cystic fibrosis will be tasking to say the least, but by following the information provided you can live an active, healthy and most importantly a happy lifestyle. By following our preventive measures and staying away from symptomatic triggers, cystic fibrosis can be controlled to an extent that it won’t consume your entire life. Do you have some tips on how to live the highest quality of life possible with CF? If so leave a comment below, you never know the impact your tip may have on someone else struggling with CF.