Cystic Fibrosis: Everything You Need to Know 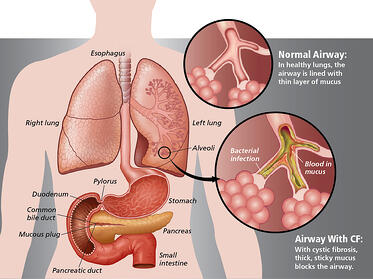 Cystic Fibrosis is a inherited disease that affects the secretory glands, which have the job of creating mucus and sweat. Cystic Fibrosis or CF affects an estimated 30,000 children and adults in the United States, and 70,000 adults and children worldwide. Cystic Fibrosis is formed when a child inherits a faulty CF gene from both parents, often times neither of the parents have CF. This defective gene and its protein product cause the body to produce abnormally thick and sticky mucus that can clog the lungs. If the mucus begins to clog the lungs, it can then lead to life-threatening lung infections. The increase in mucus thickness will also lead the patient to develop problems with their pancreas as well as interfering and halting natural enzymes from helping the body break down and absorb food. The internal organs that are mostly affected by CF are the lungs, pancreas, liver, intestines, sinuses, and sex organs.

Medical professionals use a wide array of tests to determine whether or not CF is present in a patients body. To get a head start on the disease all states screen newborn's for CF with either a genetics or blood test, the blood test will determine whether the newborn's pancreas is working properly or not. Here are a few others diagnostic methods doctors will use:

Since Cystic Fibrosis is genetically passed on from parents to children more than 70% are diagnosed before or by the age of 2. One of the biggest alerting factors for parents is when they kiss their child they are often left with a salty taste in their mouth. Since the symptoms of CF vary from patient to patient many of the additional symptoms are felt later on. The symptoms will also vary because the disease reacts in patients bodies differently, so the symptoms felt will depend on the way CF affects the respiratory, digestive, and reproductive systems.

Unfortunately men who are diagnosed with Cystic Fibrosis are infertile due to them not being born with vas deferens. Women may also have a difficult time getting pregnant because of mucus blockage in the cervix. These are the most common symptoms felt by patients, however that does not mean every patient will have these difficulties and to find out the exact affects of CF on your body then speak with your medical professional.

Chest Physical Therapy: This is simply the patient banging on their chest over and over again with their hand or medical device, what this does is loosens up the thick, built up mucus in the lungs eventually causing the patient to cough it up.

Exercise: Exercises that are highly focused on aerobics causing high breath rates are highly recommended by doctors because these movements will cause the mucus to loosen, eventually causing the patient to cough it up. Patients need to be aware that CF causes sweat to be extremely salty causing the body to loose extreme amounts of salt when sweating. Doctors may often design a diet with higher sodium levels to supplement the expulsion of excess salt.

Oxygen Therapy: If a patient has advanced lung disease or a difficult time breathing while doing regular tasks then oxygen therapy may be recommended. Oxygen therapy is a treatment process used for people with oxygen deprivation due to Cystic Fibrosis or other chronic lung diseases. The air we breathe is 79% nitrogen and 21% oxygen, whereas medical grade oxygen is anything 88% pure oxygen or higher. The most common oxygen delivery systems are; oxygen concentrators and liquid oxygen. To receive medical oxygen all patients must have a prescription from their doctor.

The affects felt from Cystic Fibrosis are felt by both the patient as well as their families, which is why the Cystic Fibrosis Foundation with the help of donations has been leading the way in research, treatments, and finding a cure for a disease that has been affecting families for far too long. With the help of research and donations as well as advances in medical technology, the life expectancy has expanded from not much longer than elementary school in the 1950's to now seeing patients live well into their early 40's. So if you or a loved one is diagnosed with CF don't loose hope, and remember a little positivity can go a long way!