Lung Cancer & its Affects on the Lungs 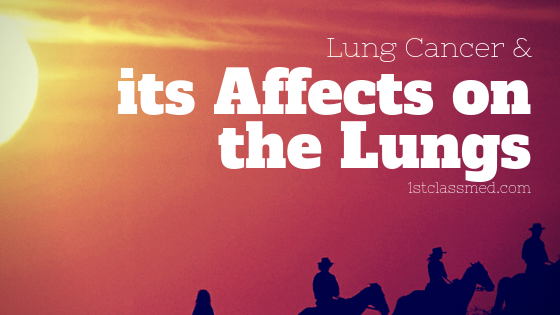 These cells can begin to form tumors over time, which can interfere with healthy lung tissue growing and blood flow from moving throughout the body.

Lung cancer can spread throughout the body to other organs (the spread of cancer cells from one organ to another is called metastases).

There are two main types of lung cancer, small cell and non-small cell cancers, they grow different than one and other and are treated differently as well.

Small cell lung cancer is less common (only 15% of lung cancer in the U.S. is small cell) and there are only two stages of it.

The limited stage is when the cancer is only on one side of the chest, one part of the lung and nearby lymph nodes.

The extensive stage is when the cancer has spread to the other regions of the chest or other part of the body.

Non-small cell cancer is more common than small cell lung cancer, but both are commonly caused by smoking (though non-smokers can get lung cancer as well).

Substances in the environment can also cause cancer, these are called carcinogens.

Some carcinogens that can cause cancer are arsenic, asbestos, formaldehyde, radon, soot and wood dust. 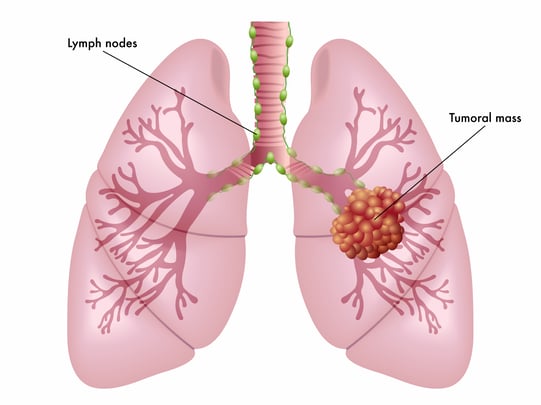 Symptoms of lung cancer can include coughing, chest pain, shortness of breath, change in color/volume of sputum, harsh sounds during breathing, lung problems (bronchitis/pneumonia), coughing up blood and mucus.

If the lung cancer has spread throughout the body, there may be other symptoms depending on where the cancer spread.

In order to diagnose lung cancer there most likely will be a screening procedure done first, such as a CT, MRI or PET scan.

If there is lung cancer suspected from the screening, there will be a biopsy preformed to further investigate.

A piece of tissue from the lung will be looked at under a microscope to look for cancer cells (biopsy).

A bronchoscopy may be done by inserting a tube into the patients mouth or nose and go into the lungs, this tube has a light and camera for doctors to see the lung and remove a sample of the tissue.

Or the doctors can use a liquid biopsy which is done by taking a blood sample and analyzing the DNA in the blood.

Tumors shed DNA material into the blood when the cells die, this allows doctors to simply draw blood, so it is less invasive, and results can be given faster.

If any of the tests done come back positive for cancer cells, a genetic test may be performed next.

Genetic testing allows the doctors to look into the tumor and figure out if there was gene mutation, or other changes that could have caused the cells to be cancerous.

This genetic testing can help doctors determine a treatment plan more custom to your health.

Who Should Get Screened

It is important for those with a history of heavy smoking (smoking a pack a day for 30 years, or two packs a day for 15 years), currently smoke, or have quit within the past 15 years or are between the ages of 55 and 80 years old.

It is recommended for those who need to be screened for lung cancer should be screened every year via lose-dose computed tomography (LDCT).

Surgery is normally the treatment for stage 1 and 2 non-small cell lung cancer, as it is easy for the surgeon to remove the love, or section of the lung that contains the tumor.

It will depend on the facility and surgeon for what surgery will be used, many surgeons use VATS, or video-assisted thoracoscopic surgery.

This surgery is done by making a small incision into the chest to insert a tube called a thoracoscope (a light and camera attached) to then go in and remove a lobe of the lung if needed.

Chemotherapy may be done after surgery to help prevent the cancer from returning, this is called adjuvant chemotherapy and is often done for those with stage 2 and 3 non-small cell lung cancer.

For later stages (such as 3 and 4) it can be more difficult to remove the cancer surgically, so chemotherapy and radiation are normally used instead.

Stage 3 uses both treatments together, but stage 4 uses radiation to ease the symptoms.

Chemotherapy can also be used before radiation or surgery to shrink the size of the tumor and make it easier to remove with surgery or to improve the results of radiation.

Immunotherapy is a new treatment option for lung cancer that causes less side effects for the patients.

This treatment uses our own immune system to fight the tumor.

It has been found that PD-1 is a molecular brake that prevent the body from attack the tumor, so medication is used to help restart the immune system to attack the tumor.

Those with limited stage small cell lung cancer often undergo chemotherapy and radiation in conjunction with each other.

If the cancer has spread, radiation may be used to help with cancer that could have spread to the brain. 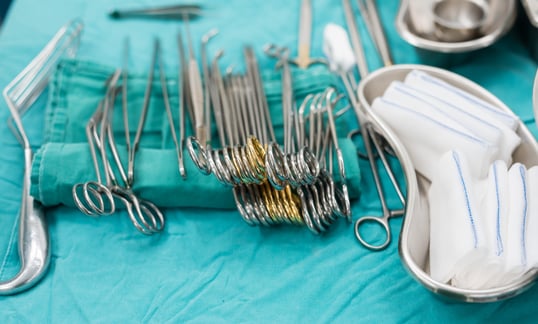 Surgery is very rare for those with limited-stage small cell lung cancer but for those with no lymph node tumors it can be beneficial, and then adjuvant chemotherapy is done.

It is important to get screened for lung cancer if you are at risk because it can make treatment easier on you and possibly less extensive.

Always speak with your doctor about the importance of getting lung cancer screenings and determine if you should be getting yearly screenings or if you are not at risk.

Understanding the differences in lung cancer as well as the stages can make it easier for you and your doctor to develop a plan for your treatment.

There are a lot of new developments along with research that are continuously coming out that are giving way to possible ways to treat lung cancers, so talk to your doctor about new development as well.