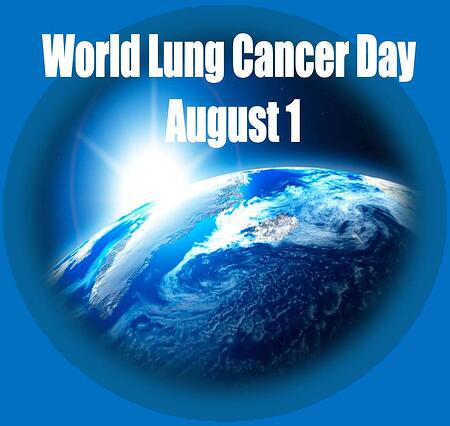 Whether you have personally experienced lung cancer in yourself or a family member has been diagnosed, or maybe lung cancer hasn't affected anyone in your life, no matter the case world lung cancer day is in place to spread the word and educate as many people as possible about this life threatening lung disease. World lung cancer day is August 1, 2014, and its purpose is to raise awareness to the 224,000 people that are estimated to be diagnosed with lung cancer this year, according to the American Lung Association. So today we will be discussing everything lung cancer, from what causes it all the way through the numerous treatment options so you can be better educated on the number 1 killing cancer in both men and women. You can send a helping hand and donate to lung cancer research here.

In healthy lungs unaffected by lung cancer their main job is to move oxygen into the body, while removing waste gases such as carbon dioxide without any trouble. Though this process may be simple, oxygen is the most important gas for all parts of the body to function. When there is a presence of lung cancer, the lungs ability to successfully transport oxygen and expel excess gases becomes damaged and difficult to say the least. This is because with the presence of lung cancer, there are abnormal cells that clump together to form a tumor. The problem lies within these cancer cells because they grow without any control, leading them to destroy healthy lung tissue in their surrounding areas.

Unfortunatley anyone is susceptible of developing lung cancer, which occurs when cells in the lungs begin to change or mutate. There are numerous things that can cause these mutations to occur, but more often than not it is due to the direct inhalation of toxic substances. These can include:

Lung Cancer Statistics According to the American Lung Association: