The Truth About Highway Pollution and Your Lung Health 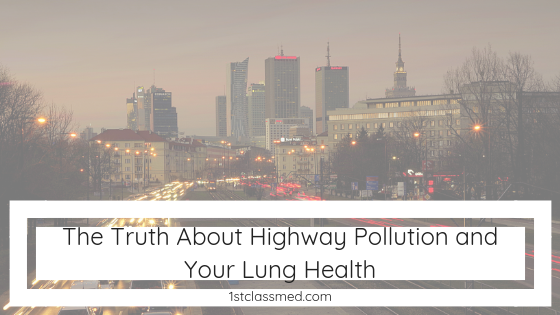 While driving and road trips can be fun, the pollution near highways can be damaging to your health long term.

Not only is air pollution near highways harmful to humans, it can also cause health issues in animals and plants.

Highway pollution can affect you when you are sitting in heavy traffic, or even miles from the busy road.

It is becoming more and more apparent that air pollution around the highways is bad, but it can also be bad nearby.

Even though auto emissions are tested in nearly every state, it doesn’t reduce much pollution on the highways.

Auto emissions tests only restrict those whose cars put off too much pollution, but it doesn’t restrict the number of cars that are putting off “safe” levels of pollution.

Too many people stress over traffic construction and congestion instead of the effects of highway pollution on our health.

What are Auto Emissions

Particulate matter (PM) exposure is related to the proximity to the source, such as living next to a major highway or living in a large city.

PM can cause some severe symptoms if inhaled such as, heart disease, poor lung function, asthma, lung cancer and leukemia.

Ozone, which is commonly called “smog”, surrounds major cities but can be found anywhere, as proximity to the source does not matter.

Nitrogen dioxide is a smelly, harmful gas, produced by the burning of coal, oil and gas.

Nitrogen dioxide can cause inflammation in the lining of the tissue if too much is breathed in and can result in lung infections.

Symptoms can arise from inhaling too much CO, such as flu-like symptoms (vomiting, weakness, dizziness, upset stomach, etc).

It is possible that an individual who is asleep or under the influence of alcohol can die by CO poisoning before they notice any symptoms.

Sulfur dioxide can be very dangerous if inhaled, as it can produce severe irritation to the nose, throat and lungs, as well as a buildup of fluid in the lungs (pulmonary edema).

If exposed for a short period of time at a high concentration, asthma can develop and become a long-lasting condition.

Lead is released into the environment in a handful of ways, from mining and metal manufacturing to soil erosion and volcanic eruptions.

Lead, even if inhaled over a short-term period of time, can cause health effects such as abdominal pain, headaches, memory loss and weakness. 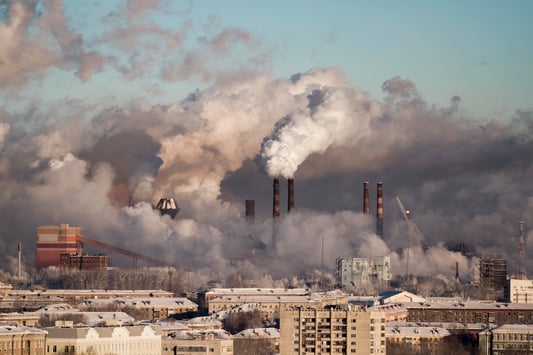 What Distance Can Do

Walking next to a busy intersection or being stuck at a red light in rush hour can be damaging to your health, as you are in a high concentration of pollution.

Those who are near the intersection with windows open or riding a bicycle can be a risk of exposure to high levels of pollution.

Within 330 ft from a major highway, the concentration of particulate matter (PM) is significantly higher than air farther away.

For pregnant women who live within 500 ft of a high traffic area, they are prone to birth complications, such as premature birth, low birth weight children, and children with medical problems.

There is also studies that show early mortality within 330 ft of a high traffic roadway.

Children living within 1,500 ft are more likely to develop leukemia, and six times more vulnerable to all types of cancer.

Past 1,500 ft, PM levels return to normal and the air is less dangerous for your health.

Though there are still some harmful chemicals in the air past 1,500 ft, it is not normally at a dangerous level.

Studies have shown that ultra-fine particulate matter can still exist 1.5 mi but is normally found downwind from a freeway.

Living downwind from a busy road or highway can lead to higher levels of particulate matter further than normal.

Wind can change throughout the day and night, meaning that the location of pollution can change as well.

There can also be a lack of air movement, which can lead to the pollution remaining very strong surrounding the highway.

Valleys and mountains can both play a role in highway pollutants as well.

Valleys often have a warm air layer over top a layer of cool air, which traps particulate matter towards the ground.

Mountains can also move pollution as wind can develop from the mountains.

Those who live in areas of higher rain and humidity can experience less auto emission pollution levels.

Though this may seem odd, but atmospheric conditions can change the size, distribution and composition of the auto emissions pollution.

This can help disperse pollution, so it is less concentrated in one area.

Cool and hot air can both prevent pollution from spreading, but if there is any humidity in the air pollution should not be as bad.

Ground level ozone is extremely unsafe on sunny and warm days, as the heat keeps the levels low to the ground and can be more dangerous for people.

The time of day can affect levels of highway pollution as well, by traffic and weather.

Not only during rush hour, the time of day can play a role in how pollution moves.

In the morning during rush hour, pollution can be very bad as there is a lot of people on the roads confined to small areas.

The pollution levels may also be high in the mornings and at night during rush hours as cool air can “freeze” pollution instead of dispersing it.

Your lungs can get damaged by auto emissions, as it is loaded with pollution that can cause inflammation.

Every chemical that is found in highway pollution can hurt the lungs and cause long lasting side effects.

The best thing to do is to avoid heavily trafficked areas and to keep windows rolled up and keep vents circulating air in the car only.

Though it may sound silly, you can buy masks to filter out any chemicals that can harm your health.

Our lung health can be easily affected by auto emissions and highway pollution, leading to lung inflammation and irritation.

Understanding what makes up highway pollution can help you prevent it in any way you can.

It is also important to know how environmental factors (weather, time of day, topography) can play a role in moving around highway pollution.

Your lungs are very important to your overall health, so knowing what can hurt them can help you prevent any decline in function.