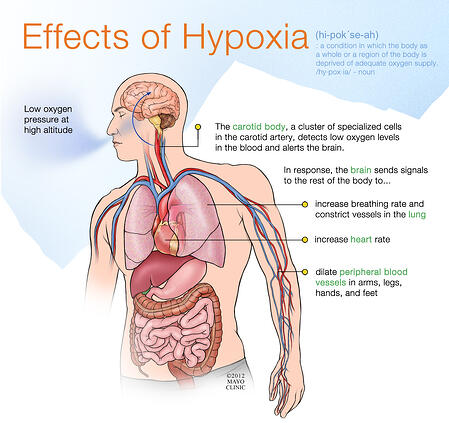 The human body can go a few days without food and water, but the human body cannot go without oxygen for a full 3 minutes. Oxygen is the single most important thing in order to operate and nourish the body throughout daily functions. In fact, just minutes without oxygen can severely damage the heart, lungs, brain, and other immensely vital organs. When the human body experiences a lack of oxygen you can be susceptible to the development of hypoxia or hypoxemia. These two are often intertwined and hypoxia is regularly used to describe both problems. Hypoxemia is typically the cause of hypoxia, because the oxygen depleted blood doesn't have sufficient amounts of oxygen present to transport to your tissues, ineffectively keeping up with your bodies demands.

Learning the Damages Done by Hypoxia

Why Does Hypoxia Occur?

When a sever case of oxygen deficiency occurs then it is referred to as hypoxia, and the way your body naturally responds could be the cause of your problematic breathing. As a natural response to hypoxia the body cranks up production of hemoglobin in the oxygen poor blood. Hemoglobin is responsible for carrying oxygen throughout the blood. Once a high concentration of hemoglobin begins being produced, it thickens the blood making it harder for blood to flow unrestricted.

If you suffer from asthma or COPD, a basic asthma attack or COPD flare-up can be the direct cause for hypoxia in both adults and children. This is due to during an attack or flare-up the airways narrow, making it increasingly difficult for air to enter the lungs. The presence of coughing only makes things worse, as it is used to expel mucus but actually can cause symptoms to worsen due to the necessity for higher amounts of oxygen.