Chronic obstructive pulmonary disease affects patients ability to breathe and live active and normal lifestyles, though with treatment and a few lifestyle adjustments you can live a happy and active lifestyle like you once led before the diagnosis of COPD. Throughout your treatment you may notice times that you have an increased feeling of symptoms such as breathlessness, phlegm production, and coughing, which is referred to as a flare-up or also known as an exacerbation. These exacerbations are often debilitating for patients and often times the exact cause of an exacerbation is unknown or it is a combination of things. Something as little as temperature change can have drastic affects on your ability to conduct your everyday life. As your COPD progresses and as time passes on you can expect longer lasting and more frequent exacerbations.

What Causes COPD exacerbations? COPD exacerbations are caused by a substance or environment known as a "trigger" that exacerbate felt symptoms such as breathlessness, wheezing, coughing, and fatigue. It is extremely important to know what specific triggers exacerbate your specific symptoms and what to do to avoid them, as well as what to do when you come in contact with them. When patients immediately begin treatment for their exacerbation, their breathing returned to the same level of shortness of breath before the exacerbation.

The most frequent causes are:

Infections and air pollution most commonly cause COPD exacerbations, but other possible triggers include:

Symptoms of a COPD exacerbation

When experiencing a COPD exacerbation your usual symptoms will become heightened, which include:

Often times an exacerbation can be treated at home with the help of supplemental oxygen or other fast acting  medications such as bronchodilators and oral corticosteroids. These inhaled medications work with the bronchial tubes to open them up and ease your breathing in minutes. Whenever you begin to feel an exacerbation don't panic and immediately refer to your action plan that you and your doctor have designed, if you do not have an action plan then speak with your doctor about getting one set up.

To help you with COPD exacerbations download our free e-book: 13 Simple Strategies You Can Use TODAY to Help You Prevent and Manage COPD Exacerbations 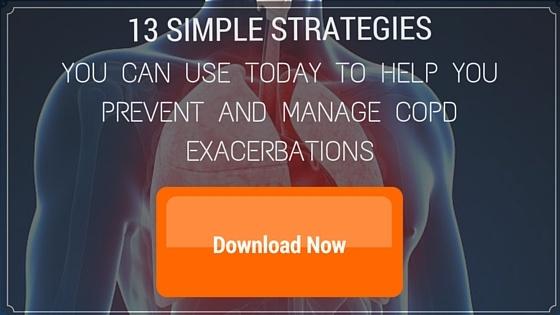