Welcome to an installment of our COPD awareness month series, if this is your first visit, November is chronic obstructive pulmonary disease (COPD) awareness month. This month is all about educating the masses about an otherwise unnoticed disease unless you have it personally or know someone that is diagnosed. COPD is the 3rd leading cause of death in the United States, and for such a high mortality rate the masses are missing out on education that can prevent or at least reduce their chances of developing such a life altering disease. Which brings us to the topic of today's post, we will be covering the numerous complications that can arise from COPD so if you have recently been diagnosed this is a post you will want to pay extreme attention to so you know what you're up against.

Once you have been diagnosed there is no getting rid of COPD, there are just steps you can take to reduce the effects and help curve the progression of the disease. For starters if you are a current smoker, you should find a smoking cessation program immediately and put down the nasty habit. While you should also strive to avoid smoking areas as second hand smoke can further irritate and worsen felt symptoms.

Throughout the many studies of COPD researchers can conclude that as the disease progresses and worsens, there is an increase in risk for a heart attack or stroke. The risk for these only increases with the occurrence of an exacerbation, which is also known as a symptomatic flare-up.

The definition of an exacerbation or flare-up is the accelerated progression of COPD symptoms, often times these are caused by exposure to lung irritants such as air pollution, dust, or fragrances, but those are not always the direct cause. Other reasons can include a sharp temperature change, infections, smoking, or exposure to second hand smoke. Typically after an exacerbation patients report an increase in coughing and mucus production, while wheezing and breathlessness are also intensified or become noticeable more. As COPD progresses the chances of an exacerbation also increase, often times they can be treated with medications but can also lead to hospitalization due to respiratory failure. If an exacerbation ever becomes too much to bear, you should immediately seek medical attention.

As your body is already weakened by COPD you are at a heightened risk of developing a respiratory infection which include, pneumonia, and the common cold or flu. Typically the body can fight off these infections and repair itself, but with COPD these infections can lead to even further breathlessness causing even more irreversible lung damage. The best way to protect yourself is to get a yearly flu and pneumonia shot, while also avoiding friends or family members that are sick.

Living with the diagnosis of chronic obstructive pulmonary disease can be a tough pill to swallow, the reduced ability to complete day to day tasks that used to be simplistic can really take a toll on emotional health. Dealing with such a life altering disease can lead patients into a pit of depression, which in turn makes you less social which can put you into even further depression. The constant struggle to breathe can lead to anxiety, and once you begin to feel anxiety that's when you are at risk of further complicating breathing.

This is structural damage to your body at the hands of COPD that can end up causing a collapsed lung, which then allows air to leak into the chest cavity putting additional strain on your heart.

Whether you are a patient or a caregiver for someone with COPD, you should educate yourself and them on the previous COPD complications so you can be prepared if any of them affect you or your loved one. If you have any concerns for any of the above, you should bring them up during your next doctor visit so they can assess you and run tests sooner rather than later if need be.

There are a number of different things you can do to help minimize the risks of COPD. A great place to start is with your diet! Download your free COPD meal plan that was created by Nutritionist and best-selling author Kellie Hill! 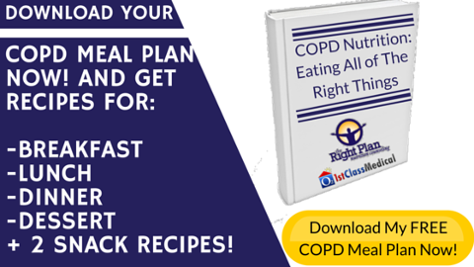