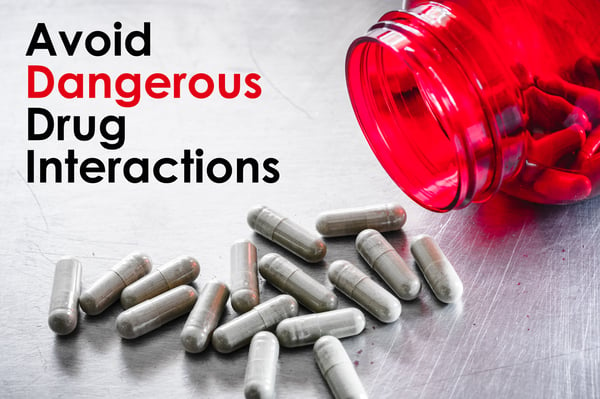 We hope you found a lot of valuable information in our previous post about the best practices for following your COPD medication regimen.  It’s so important for successful disease management. In this article we’re going to talk about things that could interact with medications making them less effective, or even dangerous.

Adverse drug reactions, sometimes known as ADRs account for at least 100,000 deaths per year and are currently the 4th leading cause of death. More than 2,000,000 people end up in the hospital with serious ADRs. As we discussed in the previous article, patient education and doctor/patient communication has suffered in the era of corporate healthcare. It is estimated that 30% to 50% of Americans don’t tell their doctor what medications they are taking. Please don’t assume that your doctor knows if you have been prescribed other medications, even if they are the ones who wrote the prescription.

If you have been prescribed any new medications, ask your doctor or pharmacist if there are any known medications that interact with the new prescription. Also find out if there are any foods or drinks that should be avoided. If you take any vitamins or supplements, be sure to discuss that with them as well. Your new prescription will likely have written directions included. Read them over carefully. If there is anything that is unclear, ask the pharmacist or doctor, don’t guess.

If you suspect that two of your medications are interacting, please do not just simply stop taking them. Before you alter or discontinue any prescribed medications, it’s important to discuss the matter with your doctor or respiratory therapist.

As we’ve discussed, your medications should come with information sheets that you should read over carefully. Please don’t be embarrassed to ask questions!

Another place you might consider looking for drug interaction information is the Drug Interaction Checker on WebMD.  You can type in multiple medications and it will find any possible interactions for you. You can also search for interactions with over the counter drugs or herbal supplements.

There is also an app that you can download onto your phone called My RxProfile.  It’s available for both iPhone and Android, and is a free download. You simply scan in your medications and the app keeps track of dosages and gives you reminders. It will also warn you of any possible interactions. It’s handy because you can share the information with your doctor, respiratory therapist, and anyone else who might need the information.

Medications that Could Make Your Breathing Worse

Be sure to carefully check for drug interactions but be aware that there are some medications, both prescribed and over the counter that can affect your breathing.

There has been a lot of debate about whether respiratory patients should take beta blockers, and research https://www.medpagetoday.com/resource-centers/copd-challenges/beta-blockers-and-copd-exacerbations-and-deaths/2947 continues. Certain beta blockers are a bronchoconstrictor meaning that they can cause airways to spasm. To counteract this, your bronchodilator dosage may have to be higher if you’re on a beta blocker. If you are using beta blockers be sure to tell your doctor. Many asthma and COPD patients use rescue inhalers that are classified as beta-agonists, which will react negatively with beta blockers.

A lot of attention is being paid to the current opioid crisis in the US. Opioids are commonly prescribed to treat acute pain and are especially common after surgery or during cancer treatment. While they are known to be effective in making those dealing with pain more comfortable, they can have an adverse effect on your breathing. Opiods work by affecting neurons in your brain blocking pain signals. By relaxing muscles they can also cause what is known as respiratory depression making it harder to breathe.

If you have an injury or condition that requires pain mitigation, please be sure to let your doctor know that you have a respiratory condition. You may also consider discussing other methods of pain relief such as acupuncture. Some conditions may benefit from nerve blocks. In this procedure, your doctor will inject pain medication directly into nerve areas where you are experiencing pain.

Chronic inflammation is common for respiratory patients. Retaining liquid in the feet and ankles, known as edema is common as well. Patients with other issues, such as congestive heart failure, may be prescribed diuretics to decrease fluid retention.

Diuretics can also cause a pH shift as well which may lead to increased CO2 retention. CO2 retention is one of the leading causes of fatigue, feelings of breathlessness, and general discomfort among respiratory patients.

To help expel CO2 be sure that you are doing breathing exercises such as the Active Cycle Breathing Technique regularly. This will help keep airways clear and make CO2 exhalation easier. If you are not familiar with this technique, watch the video below.

If you are taking diuretics, be sure to remain hydrated. It’s important to keep in mind that your lungs are about 83% water, so when you are dehydrated and your body needs water to digest food, cool your body, or perform other functions, it will likely take it from it’s largest reservoir, the lungs. This will cause breathing problems and the dryer your airways, the more likely they are to constrict.

If you lose too much liquid this can also cause an electrolyte imbalance. The body relies on electrolytes to perform many automatic functions, such as breathing. Electrolytes are chemicals which conduct electrical impulses when immersed in liquid.  They balance blood pressure, help to regulate pH levels in the blood, maintain hydration, and assist in rebuilding damaged tissue. An electrolyte imbalance can lead to more CO2 retention and increased incidences of shortness of breath. Red blood cells carry oxygen using a protein called hemoglobin. These cells deliver oxygen throughout your body. Blood pressure and heart function issues affect this delivery system causing feelings of breathlessness.

To ensure that electrolytes remain in balance, in addition to proper hydration, you may also consider adding some of these foods to your diet, if approved by your doctor.

Coughing can be one of the most annoying symptoms of chronic lung conditions. It can disturb your rest and make you self conscious when out in public. As a result, many respiratory patients regularly take cough suppressants. Coughing is your body’s way of trying to keep your airways clear so stifling a cough is not always the best idea.

When an allergen or bacterial element finds its way into your airways, nerves send signals to the brain to forcefully contract chest and abdominal muscles to force air out, in other words, to cough. This forceful exhalation will expel the irritant.

Taking over-the-counter cough suppressants is something that should be discussed with your doctor.

In the case of coughing, it’s important to make a distinction between productive and non-productive coughing.

Non-productive coughing is a dry hacking cough that doesn’t expel any mucus.

A productive cough is generally a deeper cough which will clear out some congestion. Doing the Active Cycle Breathing Technique that we discussed above will help keep your airways clear.

Allergic reactions are a common trigger for COPD exacerbation but it’s important to note that antihistamines can cause a similar reaction to opioids and can depress your respiratory system. Antihistamines and decongestants have also been reported to thicken mucus making it more difficult to expel.

Some decongestants can also raise your blood pressure while some COPD medications can increase your heart rate, creating a dangerous combination.

If you are specifically seeing an allergist who has prescribed an antihistamine, be sure to discuss your respiratory condition and let them know what kind bronchodilators or other medications you are taking.

In addition to medication interactions, it’s important to be aware of interactions with other substances as well. Alcohol is known to interact negatively with medications used to treat COPD such as antibiotics and corticosteroids.

Sleep is important for mental as well as physical health. Some people feel that a nightcap can help them fall asleep. This may be true but it can also cause you to wake during the night resulting in poor quality sleep. Alcohol is also a diuretic so it may cause you to have to make more bathroom visits during the night and put you at risk for dehydration.

Alcohol can also make you more susceptible to respiratory illnesses. There is a lot of evidence that suggests that oxidative stress enables progression of COPD. Oxidative stress impedes the body’s ability to fight against free radicals.

The body’s antioxidant defense system is designed to fight these free radicals, thereby preventing the damage or illnesses they cause. The antioxidant found in the lungs designed to fight off illness and prevent further damage, is called glutathione. Alcohol lowers glutathione levels which can lead to symptom escalation. Lowered levels can also result in increased lung damage from these exacerbations.

Enzymes found in alcohol can also interact with acetaminophen and cause liver damage and stomach bleeding. It can also amplify drowsy effects of antihistamines. Alcohol can also make blood pressure medication less effective.

There have been a lot of studies about the benefits of caffeine for respiratory patients. Caffeine is a mild bronchodilator and has also been found to reduce fatigue of respiratory muscles. Check the warnings on any medications you’re taking and keep in mind that caffeine can cause irritability, jitters, insomnia, and heart issues when used with some asthma medications that contain ephedrine.

Corticosteroids have negative effects on bone density. This is especially true for postmenopausal women for whom bone density is an issue anyway. If you have been prescribed the antibiotic, tetracycline to fight a respiratory infection or to treat exacerbation symptoms, discontinue dairy use. Milk, cheese, yogurt, and other dairy products can interfere with the effectiveness of the antibiotic.

Licorice candy or as an ingredient in tea can be dangerous for respiratory patients who have been prescribed oral corticosteroids. It can increase side effects such as nausea, weakness, dizziness, and sleep disturbances.

Whether it's another medication, both over-the-counter or prescription, a vitamin, supplement, or dietary element, it’s important to find out if it’s going to interfere with your prescription regimen. There are many tools that can help keep you safe from becoming a victim of negative drug interaction. Don’t hesitate to speak to your doctor, respiratory therapist, or pharmacist if you have any questions.