If you’ve been diagnosed with COPD you’ve probably learned that breathing exercises are essential for symptom management as well as for slowing disease progression. Maintaining lung elasticity helps prevent breathlessness and damage to other organs caused by oxygen deprivation.

How Does Your Body Get Oxygen?

We all know that your lungs are your main respiratory organ but your nose, mouth, trachea and larynx all participate in the breathing process with most of the work being done by the diaphragm. You’ve likely heard a lot about respiratory muscles but you may not know that the lungs themselves don’t have any muscle mass of their own. They act as a bellows of sorts that are pumped using the diaphragm. As the diaphragm contracts or moves downward it causes the lungs to expand drawing in air, or inhaling. As the diaphragm expands it pushes up against the lungs forcing air out, or exhaling.

The trachea leads to smaller tubes bonchi, on  to  the bronchioles and then to a smaller  but very important area  known as the alveoli which are small sacs that are surrounded by capillaries. The capillaries take oxygen via arteries, into the heart which pumps the oxygen rich blood throughout every cell in the body. As your body is using oxygen for various functions a waste gas known as carbon dioxide is produced. Commonly known as CO2, it is then transported back to the lungs to be forced out of the body, or exhaled.

When you are feeling short of breath or fatigued it’s usually not because you are not able to take enough air in, it’s because your body is not fully exhaling, leaving your lungs full of carbon dioxide. As far as gasses in the air go the body is only able to use oxygen but the air we breathe is only 21% oxygen. It is 78% nitrogen and 1% various other gasses which must be exhaled along with CO2 in order to take in more oxygen.

Often when patients begin experiencing shortness of breath it makes them want to avoid activity. When you do less, your muscles weaken, you get more breathless and the cycle repeats and deteriorates from there. Instead, if you feel breathless, the first thing you need to do is work to keep your anxiety in check. If you learn to do these breathing exercises effectively, knowing that they will soon alleviate your breathlessness will help with that.

It is naturally panic inducing to feel like you’re not getting enough air but when you become nervous or scared your breathing becomes more shallow and moves up into your chest making it more difficult for your lungs to clear out the CO2. So if you start to feel out of breath, sit down and close your eyes for a moment. Try to sit up straight so your rib cage is nice and open allowing your lungs some breathing room. Take some nice deep breaths exhaling as fully as you can.

The O in COPD stands for “Obstructive”, meaning that your airways become inflamed and congested making it difficult to breathe.

Today we're going to talk about three breathing techniques which can be used for relaxation or to help with breathlessness. Used on their own they can be very effective but when you learn to use them in a cycle, not only will they help with your endurance, they will help keep your airways nice and clear. This is known as the Active Cycle Breathing Technique.

Active cycle breathing employs 3 different breathing exercises that helps to keep airways clear.  You will begin by doing a few cycles of pursed lip breathing which will relax the airways. You will then move on to deep breathing to get air behind any congestion that may be present. With airways relaxed and air deep in the lungs, you will move on to huff breathing, or huff coughing to expel mucus.

This cycle is also used to alleviate breathlessness and improve lung function in general.

Discuss a breathing exercise schedule with your doctor or respiratory therapist and follow their direction but generally speaking this cycle should be done once or twice a day to keep airways clear and open.  Some particularly helpful times to perform these exercises are:


The first part of the Active Breathing Cycle is pursed lip  breathing. This is

sometimes described as smelling a rose and blowing a candle. You inhale through your nose, then purse your lips as you exhale. You don’t blow too forcefully, but with about the same force as you would to blow out a candle. In order to open airways and also improve lung elasticity you attempt to exhale for twice as long as you inhaled. For instance, if you inhale for a count of 3, you exhale for a count of 6.

As you exhale, pursing your lips creates some back pressure in the airways that keeps airways open for longer. This relaxes them, fostering easier breathing. 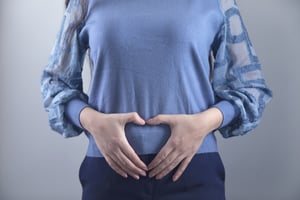 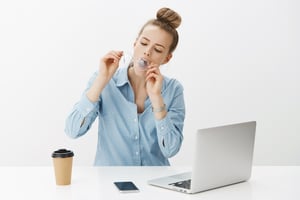 After a few repetitions of pursed lip breathing and deep breathing, your chest should be feeling nice and open and mucus should be cleared more easily.

To do this exercise, take a deep breath, hold for a couple of seconds and then as forcefully as you can exhale with your mouth open. As you exhale you will make a sort of “ha” sound as if you were trying to fog up a mirror. You’ll feel  a sort of suction feeling in the back of your throat which should bring up any congestion. Repeat this exercise as long as it is bringing mucus out of your lungs. If you still feel some congestion there, begin the cycle again until your chest feels clear.

Breathe in as deeply as you can and hold it in for 3 seconds if you can. Then slowly exhale without forcing the air out. If your respiratory therapist has instructed you to do chest clapping or vibrating to loosen mucus, do it during this part of the cycle.

Now that you’ve learned these techniques, you can use them for relaxation and to help you catch your breath if you’re experiencing shortness of breath.  Used together they will help clear your airways.

Your doctor or respiratory therapist can give you directions, specific to your ability levels on how many cycles to do, however we have put together a video that reminds you of the proper technique as well as suggests a routine to follow.

Watch the Video Below!