Effects on the Body After Quitting Smoking 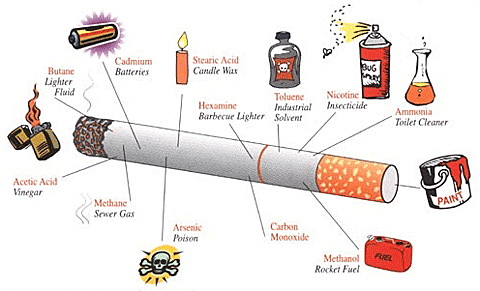 Long term, constant cigarette use is the leading cause for lung disease's such as COPD. Smoking cigarettes releases 7,000 chemical compounds into your body as well as innocent bi-standards that are in the general vicinity of the cigarette smoke. Many of those 7,000 toxic chemicals are carcinogens, which are better known as cancer causing agents. Second hand smoke is just as if not more dangerous than first hand smoke, second hand smoke has been linked as a cause for lung cancer.

The US Environmental Protection Agency (EPA) classify second hand smoke as a known human carcinogen. So by choosing to smoke you are not only negatively impacting your life but you are also being careless enough to endanger the lives of friends and family.

Improve your Life by Quitting Smoking

20 Minutes after quitting smoking - Heart rate will begin to return to a normal level.

2 Hours after quitting smoking - Peripheral circulation may begin to improve, nicotine cravings and withdrawals usually begin after 2 hours. Symptoms can include:

48 Hours after quitting smoking - Taste and smell though may not be life threatening, becomes damaged with cigarette use. After 48 hours of not smoking the nerve endings for smell and taste will begin to regrow, which will enhance both.

3 Days after quitting smoking - This point in time is when all of the nicotine is out of the body, and generally when the physical withdraws begin to occur. Which can include:

2 - 3 Weeks after quitting smoking - Lung and circulation functions will greatly improve, physical activity will be much easier and not as tiresome. Breathing becomes much easier.

1 - 9 Months after quitting smoking - Close to about a month after quitting the lungs will begin to repair themselves, the cilia, the little tiny fibers that push mucus out begin to repair themselves and return to normal function. Now that the cilia are repaired the chances of an infection decrease. Withdrawal symptoms even for the heaviest of smokers will be eliminated completely after a couple of months.

One Year after quitting smoking - The chances of heart disease are lowered by 50%.

5 Years after quitting smoking - The toxins that smoking releases, mainly carbon monoxide poisons the body and thins the blood vessels making you more likely to have a stroke. The risk of having a stroke is reduced to that of a non-smoker after 5 - 15 years without a cigarette.

10 Years after quitting smoking - Smoking puts people at an extremely heightened risk of developing cancer, after 10 years of being smoke free the risk of dying from lung cancer is 50% less likely than that of a current smoker. The risk for Pancreas and larynx cancer is also reduced.

15 Years after quitting smoking - The risk for heart disease returns to that of a nonsmoker.

By making the promise and pushing yourself to quit smoking you are greatly improving your overall health, as well as lowering the risk of developing numerous types of cancers, COPD, and improving your overall quality of breathing. More importantly years can be added onto your life by simply vowing to put down that toxic cancer stick.