What is the AQI and How to Understand it 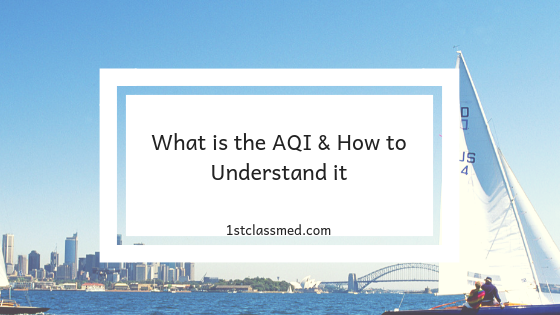 AQI or the air quality index, is an index provided by the U.S.A.’s Environmental Protection Agency (EPA).

This index provides a daily scale that defines the quality of the air in locations all over the United States.

The scale ranges from 0 to 500, 0 being good air with minimal to no risk, and 500 is considered beyond the AQI scale and is hazardous.

The AQI allows the EPA to communicate the current air quality every day to the public.

It is colored-coded to show the condition and make it easier to understand the index in your town.

With each color is a short statement to explain the air quality, who can be affected and what you can do to prevent exposure to air pollution.

AQI is required for populations of 350,000 or larger and many more towns report it as a public service.

Why it is Important Air quality is a main cause of health ailment and premature death around the world, it is estimated that pollution kills around 3 million people every year.

Ozone pollution comes from emissions of volatile organic compounds (VOC) that interact with the sun and heat up to become ground-level ozone.

On cooler days you may not see as much smog due to less sun heating up the VOC.

This ground-level ozone is smog, which we see in large cities.

The ozone pollution can cause irritation to the eyes, nose, throat and lungs.

Damage done to the lungs from ozone pollution can cause long lasting effects, causing irritation to the lungs and possible causing lung disease.

Air pollution is made up of small particles that can get into the lungs and blood stream, long term causing heart and lung diseases and possibly even lung cancer.

Sulfur dioxide and nitrogen dioxide are both emitted by factories and cars, it is possible for them to cause ailments such as asthma.

High levels of either VOC can cause permanent lung damage and even reduce lung function.

Carbon monoxide is also released into the air from fossil fuels, as a colorless and odorless VOC, which can lead to confusion, dizziness and possibly death.

Lead can cause damage to the kidneys (causing lower kidney function), the entire nervous system, the immune system, and even developmental problems in children.

AQI allows the population to see the severity of the air outside and decide if it is safe for the lungs to go outside, or if staying inside is a better choice for the day.

The quality index allows the population to know about high levels of air pollution and what it can mean for their health.

How to Read & Understand the AQI

The air quality index has 6 sections, for each severity of the index, including a number value and color.

The first section of the index represents good air quality, using the color green and the values of 0 to 50.

Air in the green category poses little to no risk of health concerns to the public.

The second section of the index is moderate air quality, represented by the color yellow and the values 51 to 100.

This value means the air is generally safe but those who have sensitivities (asthma, allergies) to air pollution should be cautious with the air, as respiratory symptoms can flare up.

The third section is considered unhealthy for those with sensitivities, represented by the color orange and the values 101 to 150.

This section means that though many without any sensitivities will not have any reactions, those with sensitivities (older adults and young children) are at risk for exposure to the small particles in the air.

The fourth section covers unhealthy air, represented by the color red and the number values of 151 to 200.

This section means that there can be adverse health effects on anyone who goes outside, and those with sensitivities can have serious side effects.

The fifth section of the AQI is represented by the color red, and value of 201 to 300.

As this section is a very unhealthy area, most of the population can experience more severe health impacts.

The sixth and final section of the AQI is represented by the color maroon and the values of 301 to 500.

The final section is considered a hazardous air quality level, everyone is likely to be affected by this and an emergency alert would most likely be broadcast on tv and radio.

The population should take steps to protect themselves from the air as it can cause health problems quickly.

Understanding each section of the index allows you to take possible steps to avoid any effects from the air.

It is very important for those with preexisting respiratory conditions to take steps any time the section goes to yellow (second section).

By checking the AQI often it allows those with respiratory conditions to plan their outdoor activities according to what is safe for them.

Understanding how to read the AQI can allow you to be proactive with your health and avoid going outside when the air quality is poor.

The EPA puts out daily AQI report to keep the public updated about the current air quality.

The national index for air quality has been issued every day since 1976 by the EPA, the index sections are the same for every state.

The AQI has been issued every day since 1999 and has had a few updated over the years to reflect health-based air quality standards.

Though the AQI does not cover every air pollutant, it does cover the five major pollutants that are regulated by the Clean Air Act.

The AQI changes ever so slightly for each individual pollutant, following health-based national ambient air quality standards, as well as scientific information.

The ozone AQI is only an 8-hour index, whereas particle pollution is 24 hours.

The AQI can also affect indoors if the windows are left open when the AQI score is poor, or if there are not good filter on air conditioning units or furnaces.

The forecasts produced by the EPA are a prediction of the day’s AQI, often issued in the afternoon for the next day.

Both state and local air quality forecasters in the country issue the reports near their location to provide accurate information.

The local AQI forecast will be released the day before to inform those who may be affected as well as steps that can be taken to reduce any exposure to the air pollution.

Check your state or local agency to see if they provide AQI forecasts, as some smaller areas may not have these forecasts.

Sometimes local news and media outlets will post the forecast, if not going to airnow.gov can also provide you with the current air quality in your area.

Using the AQI forecast is similar to checking the weather, if you find yourself with a respiratory condition it is important to check and see what the air quality is as well.

Checking the AQI allows you to prepare for any outdoor activities before you head out on your plans for the day.

It is important to know how to read the AQI forecast so when you do look at the days forecast you know what it says and if you can continue with your scheduled plans.

By staying informed with the current AQI, it allows you to protect your lungs no matter where you are at.