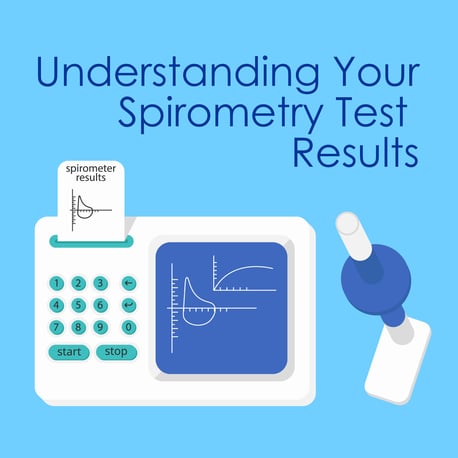 Spirometry testing is one of the most common tools used in diagnosing and treating COPD and other chronic respiratory conditions. It is used to test lung function, to diagnose lung conditions, and to evaluate current treatment regimens to ascertain if adjustments need to be made. It is one of the first steps that pulmonologists will use to assess lung function to ascertain if lung disease has progressed and if a patient may need to be prescribed a device like a portable oxygen concentrator.

A spirometry test is basically an office test that pulmonologists use to measure how well your lungs are functioning. It measures three things:

Each of these aspects are then noted on a written report. If you’ve looked at a spirometry report it may have looked like a confusing  jumble of numbers but don’t worry, if you understand what is being measured, it’s easy to interpret your results. We’ll explain that as well.

How Does the Test Work?

A spirometry test involves a machine called a spirometer that measures your breathing volume. You’ll blow into a tube or mask attached to the machine and it will record the results of how much air you inhale, how much you exhale and, how quickly and forcefully you exhale. You can plan on about 30 to 60 minutes for the entire procedure. 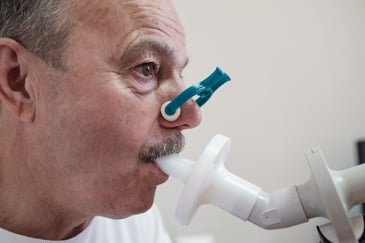 Usually they repeat this process three times to make sure that your results are fairly consistent. The highest value from the three tests is normally used as the final result.

You may not be able to get feedback right away. Sometimes a pulmonologist will need to analyze the results.

Your spirometry report will record 4 values in regards to your lung function.

The total volume of air you were able to blow into the spirometer is the Forced Vital Capacity, abbreviated as FVC on your report. The volume is measured in liters. Average normal values for healthy males age 20-60 range from 4.75 to 5.5 liters. For females age 20-60, the normal range is from 3.25 to 3.75 liters. The predicted column compares the actual total volume exhaled to the average total volume of those of the same gender, height, and age. It’s expressed as a percentage of the average value. Values between 80 and 120 percent are considered normal.

The second parameter measured is the volume exhaled during the first second of exhalation. It is abbreviated as FEV1 on your report. This volume is also measured in liters. For males, age 20-60 normal values range from 3.5 to 4.5 liters. For females 20-60, the normal range is 2.5 to 3.25 liters. The predictive column is expressed as a percentage of predicted values. Again between 80 and 120% is considered normal. Anything less than 50% is considered severe.

This measurement is important because obstructive respiratory diseases such as COPD cause difficulties in forceful exhalation. An obstructive condition may reduce the percentages to 45 to 60%.

On the other hand, restrictive conditions such as interstitial lung disease or pulmonary fibrosis tend to reduce both the FCV and FEV1 values so that the ratio remains in the normal zone. This helps the doctor understand the nature of your respiratory difficulties.

The 4th parameter recorded during a spirometer test is the total duration of your exhalation time. This parameter is measured in seconds. 6 seconds is considered a standard duration for these tests for accurate results so you should try to exhale for a minimum of 6 seconds even if you run out of breath sooner.

Now that you understand what the measurements on your spirometry test indicate you can better understand how to evaluate the results. 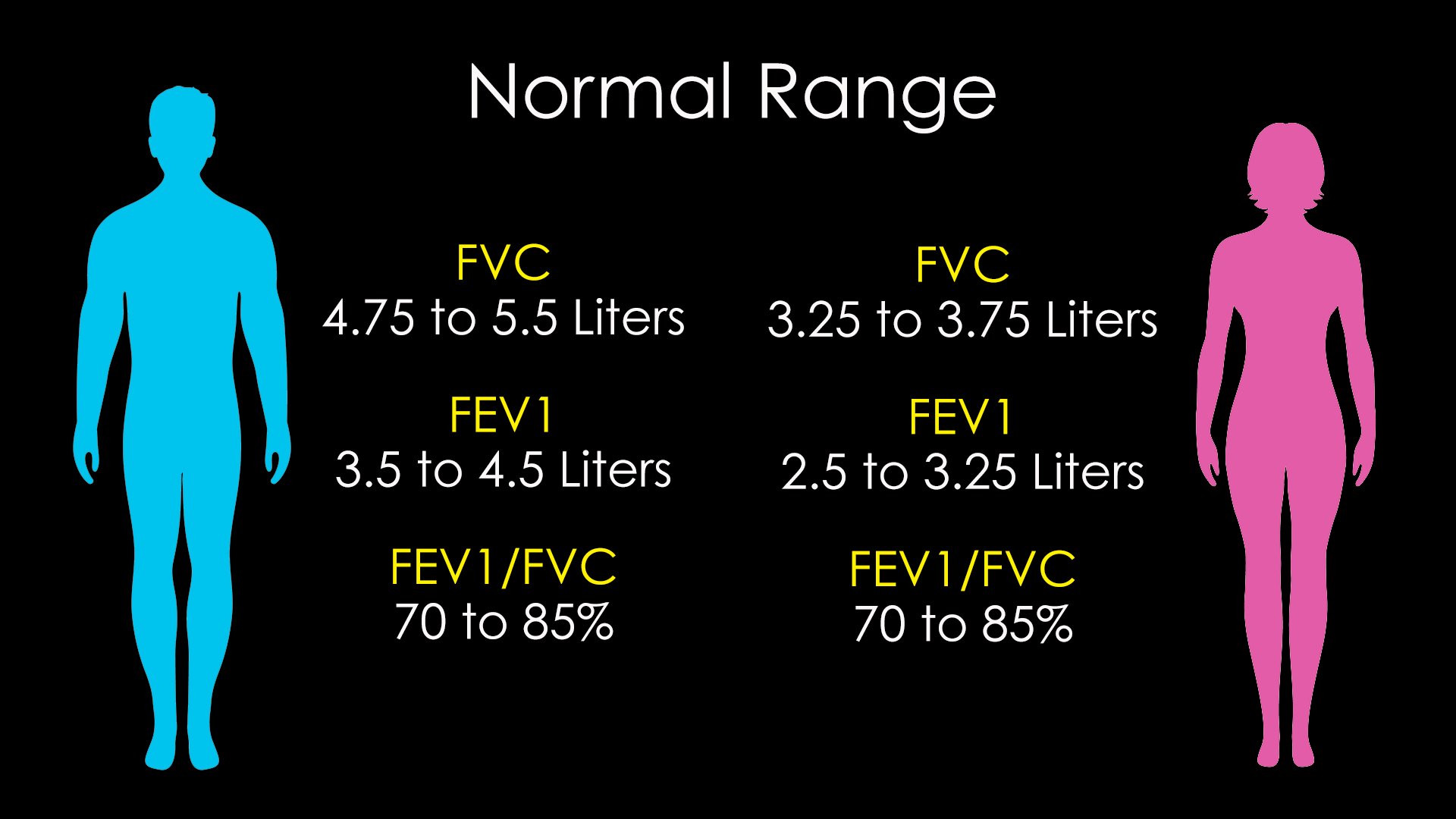 First start by looking at the FVC measurement to see if it is in the normal range.

If both your FVC and FEV1 values are in the normal range, in all likelihood your results will be considered normal and no intervention will be suggested by your doctor.

If either the FVC or FEV1 values are below the predicted normal volume, there is a possibility that you have compromised lung function.  If your FVC is lower than 70%, it is possible that you have some form or restrictive lung disease and your doctor will likely order a full range of pulmonary function tests.

In general your Forced Volume  and one second values should be above 80% and your calculated  ratio should be above 70% to be normal. If your ratio is below 70% it is likely that you have some sort of obstructive lung condition.

If you have already been diagnosed with a lung disease, you may occasionally be asked to take a spirometry test to evaluate your treatment regimen. In these tests,  your FEV1 volume may be measured after you’ve been given a bronchodilator treatment. The resulting percentage value as compared to predictive values are used to grade the severity of your lung condition.

Less than 30% is very severe or stage 4 COPD

Keep in mind that these are just general guidelines and you should follow your doctor’s interpretation of these results. Also keep in mind that even though many lung diseases are progressive and there may be no cure, it doesn’t mean that nothing can be done. Learning proper disease management skills can slow disease progression and ease symptom severity.

This video goes over the particulars of your spirometry test. Click here to watch and be sure to subscribe to our video channel to be sure you don’t miss any of our content.

If your spirometry test indicates that in order to remain healthy, you require supplemental oxygen, please give us a call. Our respiratory specialists can answer any questions that you may have about portable oxygen concentrators. They can help you select the model that is best for your condition.  We can be reached at 1-800-520-5726.