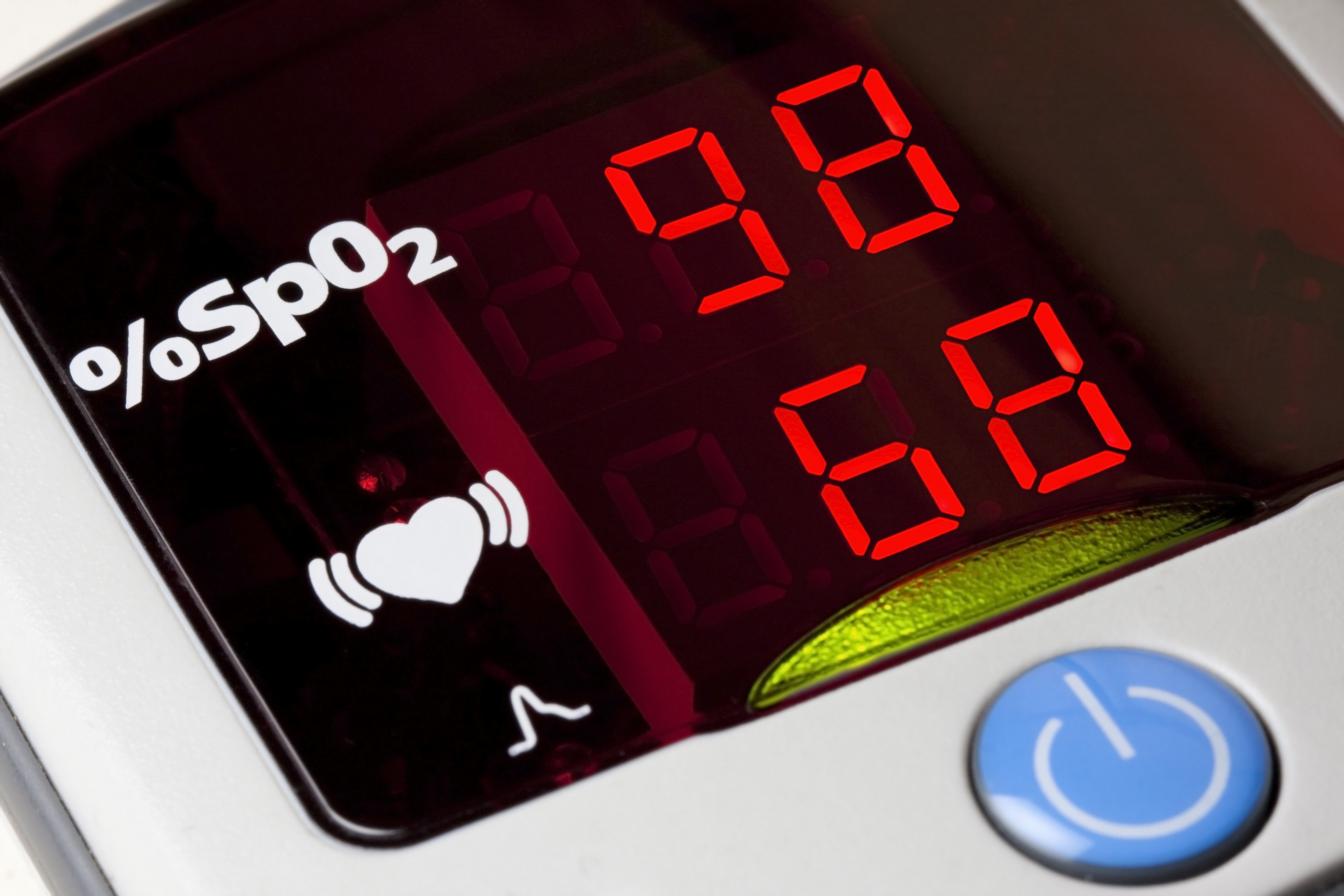 What is Oxygen Saturation?

Oxygen saturation is the measurement of the amount of oxygen that is being carried in your blood. It’s important that respiratory patients understand how their oxygen saturation rates relate to their feelings of breathlessness and over all respiratory health.

Oxygen is carried throughout your body to every cell and organ via a protein in your blood called hemoglobin.  Oxygen saturation is the measurement of how much oxygen saturates this protein.

Your pulmonologist or respiratory therapist will advise you about what saturation level is normal for you and when you should seek immediate medical attention. In general, most people with normal lung function have oxygen saturation levels somewhere in the upper 90 percentile. Anything above 90 is considered “normal”.

How Does Oxygen Saturation Work?

As you breathe, air is drawn into your lungs where oxygen is extracted for use within the body and CO2 and other gasses are exhaled or otherwise eliminated as waste. As we said, oxygen is carried in your blood cells via hemoglobin. Healthy red blood cells each have an estimated 270 million molecules of hemoglobin. Each of these molecules contains iron. Oxygen binds to this iron after it diffuses from the alveoli in the lungs.

Factors That May Affect Oxygen Saturation

Oxygen saturation that is chronically low or low for extended periods of time can have serious consequences. This is known as hypoxemia. Every single organ, tissue, and cell within the body requires oxygen in order to function properly. Repeated or prolonged oxygen deprivation can result in anything from minor tissue damage to organ failure. If you have symptoms of hypoxemia or have noticed that your oxygen levels are often low, speak to your physician about it without delay.

If you are experiencing any of these symptoms, seek emergency medical assistance.

How is oxygen saturation measured? 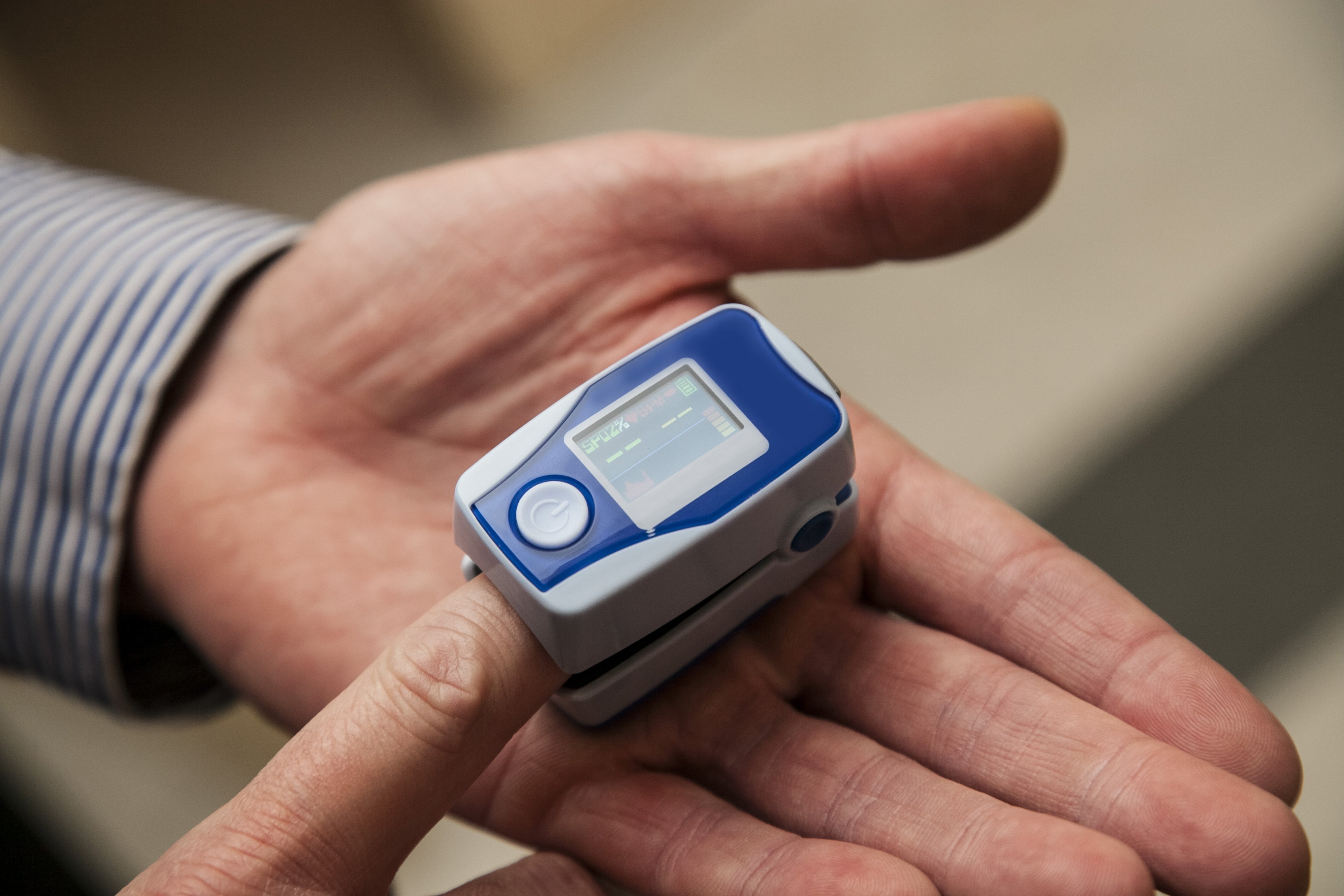 There are two main methods to measure oxygen saturation. One is done at a doctor’s office and the other can be done at home.

The first method is the arterial blood gas test. This is the most accurate assessment of your oxygen saturation. It can also measure other factors such as pH and levels of other gasses that may be present in the blood. Blood that is in your arteries is oxygenated whereas in your veins, it is not. So the doctor or pulmonary specialist will draw blood for an artery for analysis. Usually the doctor will use the artery in your wrist since it is easily accessible. Patients have reported that it can cause some discomfort since there is less tissue at the wrist than your elbow where blood is usually drawn.

A pulse oximeter is a much less invasive procedure and can be done by the patient. A pulse oximeter is a small device that can be purchased for around $20. The device clips onto your finger most commonly. They also sometimes affix to the earlobe or toe.  On one side is an infrared light and on the other is a sensor. The light shines through the finger. The sensor estimates how much oxygen is in your blood by the amount of infrared light is absorbed.  This method of saturation measurement is slightly less accurate but it is easier and results are instantaneous. Pulse oximeter tests are generally thought to have a 2% error window. This means that your reading can be up to 2% higher or lower than your actual saturation level.

One of the most common symptoms that respiratory patients struggle with is breathlessness. It can have a variety of causes, some physical and some psychological.

Respiratory patients suffer from varying degrees of lung elasticity loss making the gas exchange of sending oxygen into the bloodstream and exhaling carbon dioxide less efficient. CO2 lingering in the lungs and a lack of oxygen causes feelings of fatigue and breathlessness.

Breathlessness can also be caused by emotional factors. Anxiety causes a fight or flight response within the body. Stress or anxiety causes breath to speed up and also to become more shallow. As you draw more air into your chest without fully exhaling, breathlessness becomes more pronounced. This causes breathing to quicken even more, compounding the problem, creating a downward spiral.

As patients become more breathless they often look to their pulse oximeter results for answers. Oxygen saturation levels are valuable information but they are only a small part of your respiratory conditions.

Some patients have noticed  that they feel short of breath even when their saturation levels are in the 90 percentile.

Others noted that their saturation levels have dropped down into the 80s but they didn’t feel short of breath.

Pulse oximetry is often used because it’s easy for the patient to do and is fairly accurate but it is only one part of the picture of how well your respiratory system is functioning. That’s why saturation levels aren’t always linked to breathlessness.

Think of it This Way.

Your respiratory system is like a factory assembly line.

Your heart is the motor that makes the assembly line move.\

Each blood cell containing hemoglobin to which the oxygen binds, travel through the bloodstream. The blood cells with hemoglobin are the boxes

Oxygen is the product that goes into the boxes.

So your heart and circulatory system keep the production line full of boxes moving right along. But sometimes the boxes aren’t getting filled up properly because you might have problems getting oxygen in because of lung issues. If this is the case then your saturation levels are low.

Sometimes the boxes are full so your saturation levels are where they should be but for some reason the engine or heart isn’t moving the boxes through properly. This could be because of a heart condition such as congestive heart failure.

Sometimes there is plenty of product, or oxygen, but not enough boxes and this means you are anemic. Anemia means that you are low on red blood cells. Studies have shown that anemia is common with those who have COPD or other inflammatory related conditions.

Basically a pulse oximeter can tell you how full your boxes are but it won’t tell you how many boxes you have or if they’re moving along normally and this is why readings aren’t always a good indicator of breathlessness and why you shouldn’t depend solely on pulse ox readings.

We have put together this video to help you better visualize this concept.

Some of the symptoms of each of these conditions are similar so your best bet is to seek advice from a medical professional right away if you are experiencing any of them.

Low oxygen saturation means that you have the proper blood count, but because of a lung condition, your hemoglobin is unable to bind to sufficient oxygen. This means that your cells and organs aren’t getting enough oxygen to perform the functions that they need to.

Heart failure means that, while your lungs are filling up the hemoglobin in your blood with oxygen, but your blood cells aren’t effectively being circulated throughout your bloodstream.

In diseases that create an abnormal immune response, such as COPD, anemia is common. The proteins that cause inflammation are called cytokines. Scientists believe that these cytokines shorten the normal lifespan of red blood cells. They also believe that it makes it more difficult for bone marrow to create more. These factors create a condition called anemia in which blood lacks red blood cells.

The most important thing to remember is, if you are feeling any symptoms of hypoxia such as confusion, changes in heart rate, coughing, sweating, wheezing, shortness of breath, or a blue tint to your lips or fingertips, you should seek immediate medical attention.

Secondly, keep in mind that if you are feeling poorly you should speak to your doctor, no matter what your saturation numbers are.