Meet a Special Olympian who is Very Special to us! 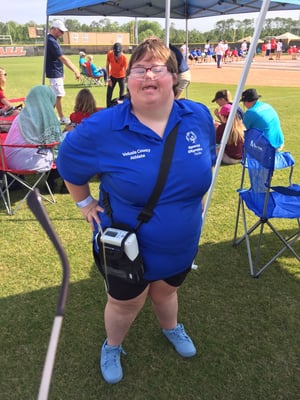 Have you ever met a pageant queen who is also a multi-sport Olympian? Well, wait no more! Meet Miss Kelly Jones!

Ralph Marston said, "Excellence is not a skill. It is an attitude."  From everyone I talked to about Kelly it's obvious that this lady achieves excellence in all she does through her amazing attitude. The first thing that everyone who contributed to this story said about Kelly is that though she's faced a lot of challenges over the years, she never complains, she always tries her best, and never backs down from a challenge.

Kelly was born with Down Syndrome but it seems she never let it slow her down. Kelly was raised by her mom, Joni, in northern Florida. Growing up, she played out in the Florida sunshine and was an avid swimmer. At 8, Kelly began competing in the Special Olympics. She has competed in basketball, swimming, and bocce, both regionally and in the Florida state games as well!

Bocce has its roots in ancient Rome and is still quite popular throughout Europe. It’s 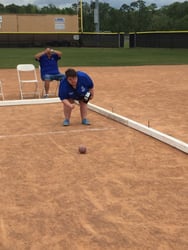 sort of a mixture between shuffle board and bowling. The first player throws a smaller ball, called the jack, into the field of play. Each player is then given 4 balls to roll. The object of the game is to get your ball as close to the jack as possible. Whoever is closest receives a point for that round and the process is repeated. Most matches play until someone has reached either 7 or 13 points. She loved it and Kelly was awesome at it! She won ribbon after ribbon!

When she wasn't in school or working on her game, Kelly worked in the mail room at ARC for 6 years. She enjoyed the work and the feeling of independence that it gave her.

Unfortunately those living with Down syndrome can be susceptible to respiratory problems. Some are born with narrower airways making breathing difficult and any illness that causes inflammation can be extremely dangerous. Down Syndrome can also impair immunity making patients more susceptible to infection.

In June of 2017 after a bout with a respiratory infection Kelly developed cellulitis leading to MRSA. This serious infection kept her in the hospital for about a month and did damage to her spleen, liver, heart, and lungs.

Tanks Were Slowing Her Down

Due to the damage done to her lungs Kelly was placed on supplemental oxygen when she got out of the hospital. Through this whole ordeal Joni said that Kelly kept her chin up but she knew that she was disappointed that she had to give up the sports she enjoyed and had to leave her job at ARC as well. School had also become a struggle  since oxygen tanks can be cumbersome and at her flow rate, each tank only lasted only a few hours and took about two and a half hours to fill.

Being on oxygen tanks was also making her healthcare a challenge. The places that worked with her Medicaid plan often involved long car trips which are difficult to do with tanks.

How We Were Introduced to Kelly 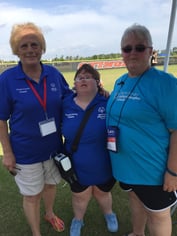 As you may know, 1st Class Medical has an office in Lake City, Florida.  Co-Founder of 1st Class Medical, Caleb Umstead, received a call from Anna Filannino who is the head Bocce coach for Special Olympics in the Jacksonville area. The photo to the right features Anna, Kelly, and mom as well as coach, Joni. Coach Anna was calling to see if we could help one of her star players, Kelly, back out onto the court as regional games were coming up. Using oxygen tanks Kelly couldn't travel to the matches let alone compete.

1st Class Medical was able to work with the funds raised by Anna and her son to get Kelly an Inogen One G4. It's light and compact, perfect for an Olympian on the go!

The Inogen One G4 also offers one of the longest battery lives of any portable oxygen concentrator so she can be out and about for extended periods of time without worrying about running out of oxygen.

The G4 comes with a D/C power supply that charges the concentrator in the car so if she has to travel for medical care or for a match, she doesn't have to be bothered with cumbersome tanks.

What's Kelly Up to Now?

She was able to go back to her job at ARC and able to compete at the regional games in Bocce where she won a blue ribbon, along with many of her teammates. She didn't get chosen to go to the Florida state games this time but she's determined to keep competing and even wants to try to return to swimming.

This past weekend she took on a new challenge. Kelly participated in her first ever pageant. Joni says, "We have been able to do so much more since she received the portable unit. She is a much happier girl!"

We're super proud to count this amazing young woman as part of the 1st Class Medical family and wish her the best of luck in future competitions of all kind!

A big thank you to Mom Joni and Coach Anna for sharing Kelly's story with us and for sharing their photos as well!