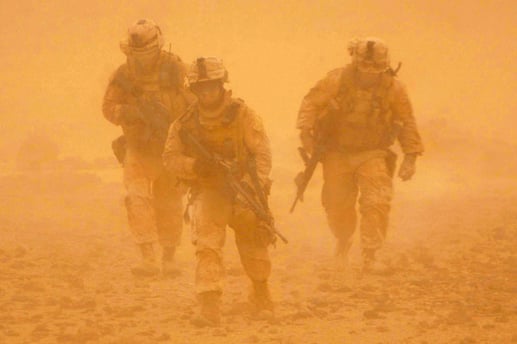 The list of occupational hazards for active duty service members is seemingly endless, from post-traumatic stress disorder, to physical injuries, and even declining respiratory health. While there has been a lot of media attention focusing on the mental and physical rehabilitation of suffering veterans there hasn’t been a lot of attention on the declining respiratory health active duty service members and veterans may already face or could face in the near future.

Anthony Szema, a pulmonary and allergy specialist at Stony Brook School of Medicine, coined the term “Iraq-Afghanistan War Lung Injury” to describe respiratory symptoms developed in some veterans that came in for help because they were short of breath. After conducting a biopsy on several patients, Szema found titanium in every single patient’s lungs. In fact, the biopsies taken matched the dust collected from Camp Victory in Iraq. Szema also conducted a study on 1,787 New York based Iraq and Afghanistan veterans which found that 14% of the vets have damaging respiratory symptoms.

Dust samples taken from Camp Victory were tested and found to contain copper, iron, and titanium. The copper, iron, and titanium particles found in the dust samples are tiny and sharp edged particles. They are about 1/30th of the diameter of human hair. Their tiny size allows the particles to freely enter service member’s lungs. Normally, when dust enters our lungs our body is able to fight off and eliminate the particles to keep us healthy, however when dust containing particles like titanium and iron enters our lungs our body cannot dispel the particles through natural immune-system processes. Instead, the dust forms polarized crystals in the lungs. Not to mention, titanium and iron are both linked to pulmonary fibrosis and pulmonary hypertension.

Szema then conducted a study on mice to try and replicate the respiratory symptoms he was seeing in the veterans using the dust samples collected from Camp Victory. By subjecting the mice to the dust samples, Szema successfully replicated the symptoms and there were similar traces of titanium and iron in the mice’s lungs. However, when using dust from the San Joaquin Valley in California, Kandahar, Afghanistan, and a titanium mine in Montana, the researchers could not replicate the same respiratory symptoms.

The dust also contains 147 different kinds of bacteria and fungi that could help spread disease. Up to 1,000 of the dust particles containing metal can sit on the head of a pin allowing the particles to easily enter service member’s lungs.

So what is causing the dust in Iraq to contain tiny metal particles? There is some speculation on what the real reason is, however there are a couple of different theories that make a lot of sense to us.

For starters, the dust may be different due to the use of open air burn pits. The military used jet fuel as an accelerant for open burn pits to dispose of anything and everything from Styrofoam to unexploded ordnance in mass quantities. That even includes things like batteries, medicines, and dead animals. For example, Balad Air Base in Iraq burned 240 tons of trash per day in an open pit. The pit was located just one mile from service members’ sleeping quarters. Burn pits were used for years after alternative disposal methods became available.

Although there hasn’t been enough research into how the burn pits may have affected the service members, there has been limited suggestive evidence of a link between exposure to burn pits and reduced lung function.