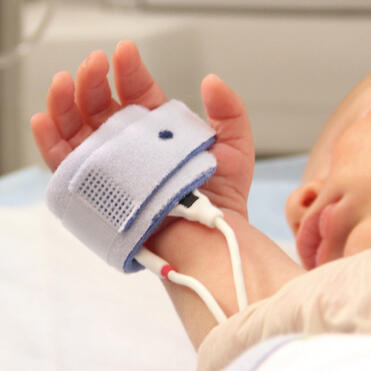 Everyone hopes their baby will be born 100 percent healthy, but there are times that this precious new life needs a little bit of help. Checking their oxygen saturation is one of the initial vital sign assessments done after birth. The red blood cells or hemoglobin transport oxygen throughout the body, and a pulse oximeter, an infrared light source device put on an infant’s foot or hand, is able to obtain the oxygen saturation.

What the oxygen saturation may discover?

Oxygen is the one gas in the cells's makeup that is absolutely necessary for one's body to work as designed. Any levels below what is considered normal are addressed immediately. Lung development is one of the last accomplished when the infant is still in the womb. This is why premature infants often have lung problems and need supplemental oxygen. Another critical need for supplemental oxygen is when an infant has a heart condition.

What level of oxygen is best?

There are some differences of opinion regarding the most beneficial levels of supplemental oxygen. Running trials on infants is not easy. Two established medical publications, The New England Journal of Medicine and the Journal of American Medical Association (JAMA), have published different results. The New England Journal puts the best oxygen level at 91 to 95 percent while JAMA prefers a lower level of 85 to 89 percent. New studies are being done worldwide. In the meantime, many medical institutions have chosen a level combining the two, 85 to 95 percent level. The infant's specific health issues play a major part as to which level would be best.

Problems from not enough oxygen

These occur mainly in premature infants. The New England report stated that an infant, who was very premature and was not given an adequate oxygen level, had a lower chance of survival. Because of this strict guidelines have to be in place for the monitoring of these infants. When a low oxygen level is suspected, the pulse oximeter is the main method of noting the levels.

Hypoxemia: Infants with low saturation rates are said to have a condition called hypoxemia.

Problems that may arise from too much oxygen

One of the main reasons for wanting to avoid higher levels of oxygen saturation is to remove the chance of the infant developing retinopathy of prematurity (ROP). This is an eye disease that causes scarring of the eye vessels. This can possibly lead to blindness. University of Michigan Department of Pediatrics found that by maintaining oxygen supplemental levels between 70 and 90 percent lowered the possibility of the infant developing ROP.

Length of time for use of supplemental oxygen

Most instances for supplemental oxygen are for those infants who were not able to come to complete term in the mother's womb. The length of time is determined by their condition at birth and the progress they make after birth. Because of the advance in medical equipment and technology, some infants can receive treatment in the home instead of needing a prolonged hospital stay.  Those infants diagnosed with a chronic lung disease are included here. Their main need for a higher level of oxygen is found to be during and after eating or when taking inhaled medicines.

How oxygen is administered at home

The most common delivery method is a portable oxygen concentrator or an oxygen tank via a nasal cannula. That is the flexible plastic tubing with the two prongs that are inserted in the infant's nostrils. Great care needs to be taken at all times as these infants are more susceptible to infection. Care must also be taken to keep the mucous membranes moist through a humidifier. Go over all instructions with the supplier of your equipment as they are able to answer your questions in most situations. Proper hygiene, cleaning care and use is critical at this time.

Hopefully, if your infant needs supplemental oxygen, it will only be for a short time. Just remember the important function that oxygen contributes when it comes to the development of the newborn. In time, they will finish the needed development and the oxygen will no longer be needed.