Fall and Winter Allergies and COPD 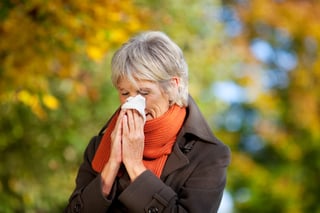 For those diagnosed with Chronic Obstructive Pulmonary Disease (COPD), summer seems to have flown past and fall could not have come any quicker, and now winter is upon us. Many people suffer from springtime allergies but from late summer to late fall, weeds pollinate and become a larger producer of inhaled allergens along with mold spores.  Seasonal allergies during the fall and winter are quite common.

There are two more seasonal allergy periods that occur within the year, one in spring when pollen from trees can cause allergenic responses and the other in summer from grass pollen. According to the Asthma and Allergy Foundation of America, an estimated 40 million Americans are impacted by allergies.

Seasonal allergies cause itchy, watery eyes and stuffy noses. These symptoms occur when the immune system reacts to dust, mold, pollen or other allergens that you may have inhaled. Certain cells are then activated by the immune system leading to the production of substances such as histamine. These substances are the cause of the allergy symptoms.

Other less common symptoms include eye irritations, breathing problems such as asthma and even skin problems such as eczema. It stands to reason that if you are coughing and sneezing a lot due to seasonal allergies, it could make it more difficult for a person diagnosed with COPD to cope with the allergies.

COPD is an umbrella term used to describe a group of progressive lung diseases including chronic bronchitis and emphysema. It is commonly linked to a history of cigarette smoking or long-term exposure to other lung irritants. The condition results in blockage of the airways and can make it very difficult to breathe.  Symptoms of COPD include;

Seasonal allergies are a nuisance for most people however for people with COPD, any 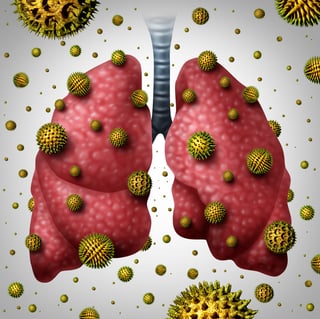 extra condition that makes breathing even more difficult than it already is, makes it automatically very serious. A 2012 study at the John Hopkins Allergy and Asthma Center found that people with COPD who experienced seasonal allergies suffered from worsened symptoms such as coughing and wheezing.

These patients were also significantly more likely to require medical attention for their symptoms. If you are not sure whether allergies are the reason to your coughing and sneezing, your physician may give you a blood test. It measures white blood cells called eosinophils, a component of the immune system that plays a role in allergic reactions.

One of the most notable contributors to allergies in the fall is ragweed which primarily grows east of the Rocky Mountains. A billion grains of pollen may be produced by just a single plant, and that pollen can travel several hundred miles through the wind and remain in the year for a long period of time.

Mold spores are another contributor, they develop in autumn and are found in the soil and leaves that fall to the ground. They rise in the morning and fall back to the ground in the evening when the temperatures are cool, and can be easily inhaled. Breathing such airborne allergens can complicate breathing for COPD patients leading and cause exacerbation. Tree grass and weed pollen are examples of allergens that can worsen COPD symptoms. They narrow the airways and increase mucus production making it very difficult to breathe.

A 2013 study in the American Journal of Respiratory Clinical Care Medicine found that a substantial proportion of individuals with COPD have an allergic phenotype or characteristics of allergies. In the groups studied, the prevalence of allergies was 25 to 30 percent.

Although there is currently no way to cure seasonal allergies, there are some things that you can do to help manage them and reduce your exposure to whatever you are allergic to. You can also get help from your doctor or your allergist to determine what is triggering your symptoms. Below are a list of things you can do to help avoid getting allergies during fall.

They may also recommend that you take other types of medication to lessen the effects. 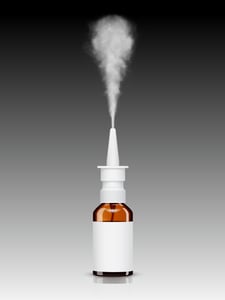 Some that are commonly prescribed include nasal steroids, antihistamines, oral steroids, and leukotriene medications. It is important not to self-medicate with over the counter drugs because some of the drugs may have negative side effects on COPD patients.

Take for example antihistamines which should be used cautiously because they have a drying effect that could make lung secretions thicker. Some can also be sedating and cause respiratory depression and should be avoided by COPD patients.

This is a beautiful time of the year, and there would be no reason for you to miss out on the beautiful colors and festive holiday activities as long as you follow the proper precautions.