Two of the main diseases that fall under the umbrella term of COPD (Chronic Obstructive Pulmonary Disease), are emphysema and chronic bronchitis.

Emphysema attacks the air sacs, or alveoli in your lungs. It destroys the walls between them making larger sacs but fewer of them which hinders the lung’s ability to exchange gasses. This means that they are unable to rid the body of carbon dioxide and supply tissues with oxygen, decreasing lung capacity and ultimately causing breathlessness and fatigue.

Bronchitis causes irritation and inflammation of the airway lining. As this lining becomes more inflexible, it becomes increasingly difficult to clear mucus from passageways constricting breathing. Feeling short of breath, wheezing, and coughing are regular symptoms of this condition. 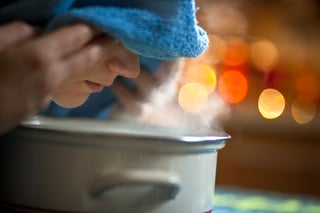 When people with normal lung function have a cold or sinus infection, they often turn to steam to help loosen mucus and clear airways. If patients have a mild case of COPD this might also work but for those with more advanced COPD, steam can trigger an exacerbation. Many COPD patients have to move from humid climates and have to limit time in hot showers as the damp air gives them a choking sensation. Those who use portable oxygen concentrators should keep in mind that steam is detrimental to sieve beds. Concentrators should not go into a steamy bathroom. If you must remain connected to oxygen while bathing, use longer tubing so that the concentrator can be placed outside the room, near a ventilation fan or open window, if possible.

COPD sufferers often take medication to help them remain as mucus free as possible. Many practice the huff cough technique to clear mucus or postural drainage. Salt therapy has been popular in eastern Europe for quite some time and is now garnering interest here in the US. There has not been a lot of scientific study on the procedure but there was a trial involving patients with Stage 2 and 3 COPD that came to the conclusion that dry salt therapy might be helpful and warranted further study. The patients tested reported clearer breathing and greater physical endurance.  Anecdotal evidence seems to suggest that it has helped many patients to clear airways and breathe easier.

Salt therapy, also known as halotherapy or speleotherapy has been in use in Eastern Europe for about 150 years. However there is even mention of it as far back as the 4th century BC when Hippocrates suggested inhaling steam from salt water to alleviate respiratory symptoms. 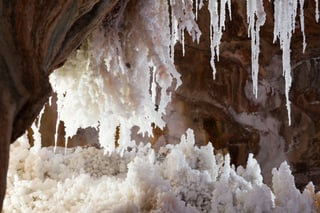 workers. He found that they had much lower incidences of respiratory illnesses which he attributed to the inhalation of salt dust.

During World War II the salt caves in Germany became bomb shelters for citizens. Regular bombings of those areas led to an excess of salt dust being distributed into the air. Those that regularly took refuge in the mines reported that their respiratory problems were greatly reduced as a result.

After the war, in the 1950’s European doctors began working toward simulating the environment of the salt caves in a therapeutic setting. Today there are many salt therapy rooms found in European hospitals especially across Eastern Europe and Scandinavia.

Where does the Salt Come From?

During the Miocene era, around 20 million years ago, Europe was under the sea. As climate changed and water receded, salt from the water remained in caves and underground deposits.

Salt is believed to have a natural ability to cleanse the respiratory passageways and eliminate toxins.

There Aren’t Any Salt Caves in my Neighborhood 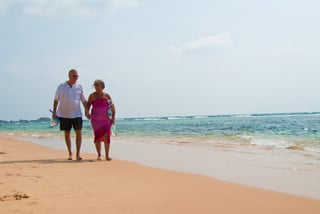 Salt therapy rooms are popping up all over but if one hasn’t made it to your area yet you can go for a walk by the sea. Sea air is said to have a very positive effect on respiratory patients as well. Living near or making frequent visits to the ocean has been highly recommended for those with cystic fibrosis.

I Don’t Live Near the Ocean Either

Alright well, if that’s not a good enough excuse for a vacation, you can also speak to your 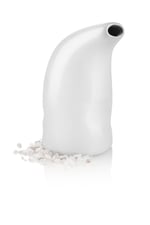 doctor or respiratory therapist about a salt pipe or dry salt inhaler. They resemble nebulizers or inhalers and are readily available online.

Table salt is largely sodium chloride. Sea Salt, though it is made from evaporated sea water, is also mostly sodium chloride. Recently there has been some discussion of Himalayan salt inhalers as well. This salt has been found for a long time in lamps. The light bulb or candle within the crystal heats the salt and is thought to help release negative ions into the atmosphere and cleanse the air or toxins. 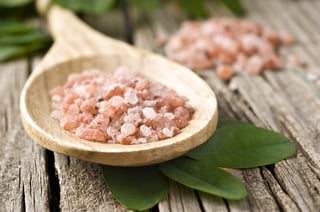 This salt has a pink tinge which it gets from the iron oxide in its makeup. Himalayan salt is said to contain over 84 minerals including calcium, magnesium, and potassium and it also contains slightly lower levels of sodium than other salts. Speak to your doctor about the benefits of these additional minerals before deciding which kind of inhaler to get.

For those suffering from COPD and other serious respiratory ailments, salt therapy may prove beneficial. As always, discuss treatment additions with your doctor before commencing. There is a lot of positive information online regarding the benefits of salt therapy. There was only one article that I found that had some misgivings, and the article is about using salt thearpy for cold symptoms but as they were from the head of the Lung Foundation in the UK, I thought it was worth mentioning. He cautioned that if not properly maintained the warm environment of a simulated salt cave could breed bacteria. If you go to somewhere like that, make sure that clinical standards are maintained. You can read the article here.