Asthma: Is It a Reversible Disease?

There is a lot of information on the internet stating that asthma is reversible, but what does that mean?

Is the disease something we can reverse given the right circumstances?

For many who have been recently diagnosed with a disease, they research more about it as soon as they get home.

But when you look online for asthma, you may see that it says it is reversible.

Was your doctor lying? Is it reversible or not?

Is There a Cure?

Currently there is no cure for asthma, the disease is a chronic disease, meaning it will not go away.

But the meaning behind reversible is a bit different when discussing asthma, let us explain. 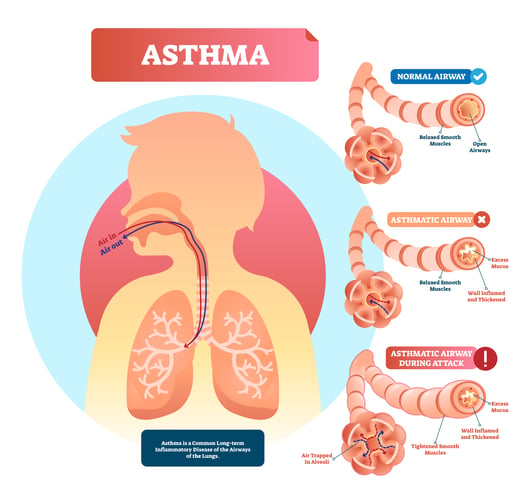 Previously, asthma was only a symptom, not a disease.

He connected the relationship between respiratory disease and the surrounding environment, still classifying asthma as a symptom.

When asthma was only considered a symptom, many metal workers, fishermen and tailors were more likely to have it versus many other careers.

It wasn’t until Aretaeus of Cappadocia (100 AC) that the first (accurate) definition of asthma arrived.

He documented symptoms of chest heaviness, difficulty breathing and tiredness.

It was noted that if the condition worsened, the symptoms became more prominent and a cough can accompany the other symptoms.

During the 1500s, tobacco was introduced as a treatment for asthma in Europe.

The idea was that tobacco would induce coughing and help expel mucus form the lungs and airways.

In the early 1900s, asthma was treated with a b2-adrenocepter agonists (causing dilation of the bronchial passages).

These medications were shown to be effective in treating asthma, but lack of restriction led to overuse and more asthma related deaths.

By the 1980s, there was a better understanding of how allergen exposure can cause the allergic asthma response.

But Why is it Called Reversible?

As it was deemed a symptom early on, it was listed under many larger conditions, such as COPD or heart failure.

When saying that asthma is reversible, it is addressing that the symptoms are reversible, not the disease.

This means that asthma symptoms subside, and lung function goes back to normal in between asthma attacks.

Many medical professionals and health experts refer to asthma as reversible, as they are referring to the symptom.

It would be easier if they address asthma symptoms as being reversible in order to prevent confusion.

How Are Symptoms Reversed?

More often than not, those with asthma will be on medication to help prevent or treat an asthma attack.

Otherwise, asthma attacks will go away on their own, simply by removing yourself from the trigger (i.e. fire smoke, pollen).

If removing yourself from the irritant does not help with the asthma attack, medication is key.

Rescue medication (often inhalers) help open the airways during an attack and can make it easier to breathe in oxygen.

Asthma medication works very well in reducing symptoms and reversing an asthma attack, but other medications can work as well.

Sometimes systemic corticosteroids may be prescribed for asthma attacks to also help open up the airways.

If you have asthma, you and your doctor will most likely discuss your asthma triggers and what you can to do prevent an asthma attack.

Sometimes, asthma controller medications can be prescribed to prevent any irritants/allergens from causing an asthma attack.

Another step besides medication, is to avoid going near a trigger.

The good thing about asthma is we know a lot about it, so we are not only able to reverse symptoms, but we can also prevent many symptoms.

Historically, asthma was only a symptom up until 100 AC when it was discovered that the symptom of asthma has its own symptoms.

As it progressed into its own disease, more and more was studied about asthma and treatments became better understood.

So, asthma symptoms are reversible but asthma itself is an irreversible disease.

Not only are asthma symptoms reversible, but they are also preventable, unlike many other respiratory diseases.