The End of Daylight Savings and Your Health 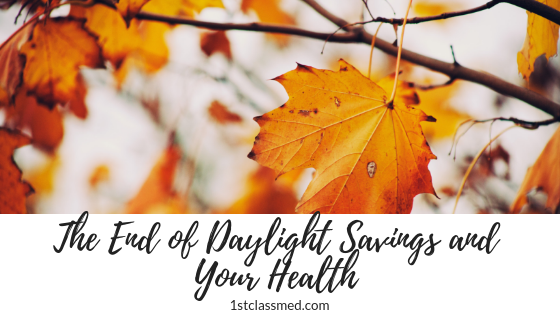 ***Daylight Savings this year started on March 11th at 2 am, and will end this Sunday (November 4th) at 2 am, so be ready to turn back the clock!***

March of 2018 marked the 100th year of Daylight Savings in the U.S., it was established to preserve daylight and provide standard time for the country.

During WWI it was used to help save fuel that was needed to produce electricity, but after the War ended many people expressed their dislike for the law, leading to President Wilson vetoing the law.

This dislike was due to how early people in that time woke up and went to bed, and Daylight Savings messed with that time frame.

Many people back in that day woke up earlier to farm and take care of their home, compared to when we wake up nowadays.

Though many disliked the law, some states and cities continued daylight savings, such as Massachusetts, Rhode Island, New York and Chicago.

During WWII it was re-instated by President Franklin Roosevelt, but it was a year-round occurrence called “War Time”.

This lasted from the beginning of 1942 to the end of 1945, after that no federal law surrounding Daylight Savings was introduced, and it was again up to states and cities to choose to observe.

As every state and city was on a different time, it began to cause confusion and make it difficult for radio, TV, airlines, railways and bus companies.

Transportation, radio stations and TV stations all had to regularly publish new schedules as states and cities began or ended Daylight Savings.

Not only did this put a strain on budgets for these companies, it still didn't guarantee that everyone had the right schedule for their company.

The transportation industry formed an organization called the Committee for Time Uniformity, with a goal to get the country on the same time.

They surveyed the nation through surveys over the phone in order to get the people to support the idea.

Only after a strong story on the front page of the New York Times, did people begin to rally behind the idea of uniformity.

What truly convinced the American people is that along the 35-mile stretch of road between Moundsville, WV and Steubenville, OH anyone who took the road had to go through 7 different time changes.

Laws changed often and states and cities continues to switch to Daylight Savings and away from it.

States are still allowed to exempt themselves, so Hawaii and Arizona both do not observe Daylight Savings.

This time change messes with our internal clock, which can have more lasting health effects.

Stroke risk is highest during the early morning, so when we wake up earlier for Daylight Savings, it can heighten the risk of stroke.

Other studies have shown that disrupting the circadian clock (our internal clock) for rotating shift work, or other reasons are also associated with the risk of stroke.

This has helped prove that Daylight Savings can have very severe consequences.

Part of the issue is when we lose time by one hour, we lose about 40 minutes of sleep, and for a country that is already sleep deprived, this additional 40 minutes can make things more noticeable.

When we gain an hour it also messed with our bodies because our bodies work off of 24-hour days not 25-hours.

The role of Daylight Savings on negative health effects is really high, effecting our sleep and our risk of stroke.

According to the U.S. Department of Energy, Daylight Savings saves about 0.03% of energy compared to the rest of the year.

It is also believed to help the economy, as it can allow people to stay out longer shopping, bringing money to businesses.

Farmers do not love Daylight Savings because it messes with their hours for farming, so many choose to ignore the time.

Many individuals believe that one standard time all year will allow the people to enjoy the summer light later at night, and continue to enjoy the winter months.

The Department of Energy noted that though electricity may not be used as much in the evenings, it can be used more for heat and light in the cool, dark mornings.

So even though electricity may be saved at night, there is still a chance that many will need more electricity to be used in the mornings during Daylight Savings.

In Indiana, it was examined how Daylight Savings would affect the state, it was noticed that turning the clocks forward an hour in the summer actually increased energy use by 1%.

Why Does It Matter?

This time change every year puts the public’s health at risk, as it is more common for the population to feel more tired.

Not only does everyone feel tired around Daylight Savings, many can suffer very serious conditions such as a stroke.

Our internal clock cannot handle a change multiple times a year, so it can affect our health and our moods.

There is also no worthwhile proof that electricity is saved, for many of us it just requires us to use more electricity in the mornings when we wake up versus later at night.

Overall it is a minor change, but it can have larger effects on our health and well being and there is no drastic proof that it actually helps save electricity.