What You Should Know: Is COPD Reversible? 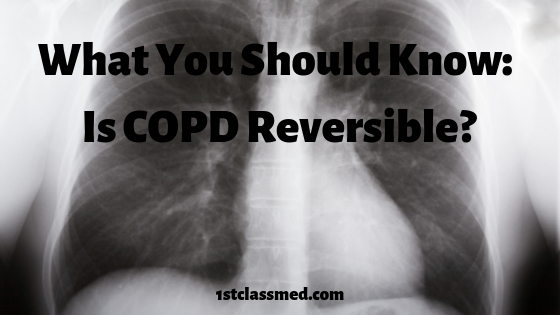 Chronic obstructive pulmonary disease (COPD) is a lung disease that can cause difficulty while breathing.

COPD is a broad term for lung diseases such as emphysema, and chronic bronchitis.

As a progressive disease, the right treatment is vital in managing the symptoms of COPD.

For many people with COPD, they may not even know they have it, but they have the symptoms.

But is it Reversible?

After a COPD diagnosis, a common question is “is it permanent?” but sadly the answer to that is yes.

COPD is a progressive disease, meaning it only gets worse over time.

Luckily there are ways to slow the progression of the disease, limiting symptoms from getting to severe.

Smoking is a large cause of COPD, resulting in 85 to 90 percent of COPD cases.

If your COPD diagnosis is caused by smoking, it is vital to quit right away.

By quitting smoking, it can reduce inflammation in the airways and helps improve the immune system.

This can help make breathing a bit easier, and lower your risk of getting an infection.

There are many things to help you quit, such as OTC nicotine alternatives (the patch or gum), therapy and prescription medications.

Smoke isn’t the only irritant to the lungs, as environmental allergens can also damage the lungs.

Allergens such as pet hair and dander, dust and air pollution from cars and factories can all trigger flare ups in those with COPD.

Not only can these cause the lungs to become inflamed, they can also cause breathing difficulties.

Those with allergies should make sure to avoid their irritant and have medication on hand in case they come in contact with it.

Both smoking and allergens are important to avoid once diagnosed with COPD, as the lungs are very fragile.

Exercise is another factor in the severity and progression of COPD, as exercise can improve how you feel and breathe.

Not only do you feel good after exercising, it can help improve your overall life.

Sadly, exercise will not cure or reverse your condition, but it can slow the progression down.

By staying active, you prevent any muscles around the lungs from weakening and this can make breathing a bit easier.

Lack of exercise can also cause the heart and lungs to have low tolerance to exercise, making it even harder to do any activities.

It may seem impossible to exercise with COPD, but if you slowly build up your muscle strength you should have an easier time exercising.

Good exercises to do are walking, alternating between sitting down and standing up, breathing exercises, using small hand weights or a stationary bike.

On average, a good goal would be to exercise 3-4 days a week at roughly 30 to 40 minutes a session, but you may not be able to do that right away.

As COPD is a progressive disease, it is bound to become more serious and the symptoms can become more noticeable.

Depending on what you do to prevent your COPD from progressing can determine how quickly it will progress.

There are also scores linked to the symptoms of COPD, but do not directly correlate to the stages.

The stage of COPD and the score assigned help doctors determine treatment for the stage and symptoms you may be suffering from.

If you maintain a healthy lifestyle, you may not progress quickly through the stages, or at all.

You can remain in the same stage for years depending on your lifestyle.

Your doctor will be able to give an accurate life expectancy based on your overall health and current lifestyle.

Early diagnosis is very important, so any symptoms such as coughing, or shortness of breath should be looked at by a doctor right away.

For many with COPD, an early diagnosis and quitting smoking can help the overall outcome of the disease.

By not quitting smoking and not living a healthy lifestyle you are at a risk for quicker and shorter life expectancy.

A key in prevent COPD from worsening is to quit smoking as soon as possible, as well as reduce exposure to environmental irritants.

By also exercising and eating right you can help your immune system as well as build up your endurance to exercise.

Other things you can do to make it easier on yourself is to move hard to reach items to a easier location to access and moving things you use everyday to a location where you do not have to constantly reach for.

Listening to your doctor is another key way to slow the progression of COPD, as they will give you advice based on your health.

If you notice any new symptoms, or symptoms that have worsened it is vital to contact your doctor to discuss the next steps in treatment.

Though COPD is not currently reversible, scientists and researchers are trying to figure out how to make it so.

It is key for the disease to have an early diagnosis in order to treat it right away and cut out smoking to slow down the progression.

Your doctor will be a great resource for your COPD diagnosis, they will be able to suggest lifestyle changes to slow the progression of the disease.