What is Tuberculosis (TB) and How Can I Get It? 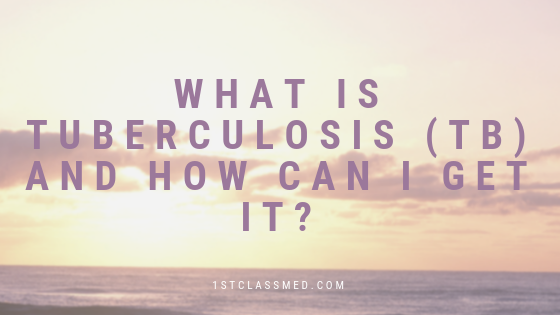 It is spread by a contagious person coughing or sneezing and releasing small droplets of bacteria into the air.

There are two types of TB, latent TB and active TB, latent means your body is carrying the disease, but it is not currently active.

Though TB used to be less common in developed countries, it has become more common as the emergence of HIV back in the 1980’s.

For people who are infected with the TB disease, it can take a few weeks to develop, but it works faster than the body can to fight the bacteria.

For those who have latent TB infections, if they do not receive treatment, roughly 5-10% of those individuals will later develop active TB at some point in their lives.

TB is commonly caused when someone who is ill with the disease coughs, speaks, sneezes, spits, laughs or sings and releases tiny droplets of bacteria into the air around them.

Tuberculosis can only be spread when the bacteria in the lungs is disrupted and coughed up or expelled by the infected person.

The TB bacteria is inhaled and then settles in the lungs to begin to grow, it can then move throughout the body to the kidneys, spine and brain.

For those with HIV, it is more likely to catch TB than those who are not HIV positive.

This higher risk is due to the weakened immune system that HIV provides, as the body cannot defend itself against the TB bacteria.

For those with HIV, they are 20-30 percent more likely to develop active TB compared to those who do not have HIV.

Tobacco use can also increase the risk of developing active tuberculosis, roughly 8% of TB causes are linked to smoking.

Many risks of TB revolve around the immune system, such as diabetes, kidney disease, cancers, malnutrition, and age (very young or very old).

Medications can also weaken the immune system, such as chemotherapy, drugs for rheumatoid arthritis, Crohn’s disease and psoriasis.

Other increased risks of developing TB include lack of medical access, substance abuse, and tobacco uses.

It is also possible to contract tuberculosis from where you work or live, such as working in a hospital where TB is common, working in a prison, immigration center or nursing home, or living in a refugee camp. 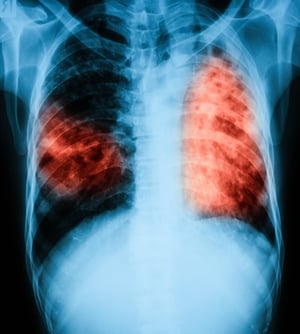 Depending on the location of the bacteria, it can change the symptoms that someone with TB can have.

Tuberculosis in the lung can have the following symptoms:

If you feel that you have any of the above symptoms, it is important to avoid sharing any germs and get an appointment with your doctor right away.

A common diagnostic test to figure out if you have TB is a skin test.

The skin test injects a small amount of PPD tuberculin (an extract from TB bacteria and does not cause the disease on its own) just below the skin on the inner forearm.

After a few days your doctor will check your arm to see if there is a hard, red bump where the skin test was given.

If a skin test does not provide accurate enough results for your doctor, a blood test may be done to further assess your possibility of being diagnosed with TB.

If your doctor wants any further testing, you could have an imaging test or a sputum test.

Imaging tests are used to look at your lungs after a positive skin test, normally an x-ray or CT scan.

These tests allow doctors to see into your lungs and look at if and how TB has affected your lungs and help doctors determine the best route of treatment for you.

Sputum testing looks at the mucus you produce to see if the TB bacteria is in your coughed-up mucus, your doctor can also test your mucus for the strain of TB, so they have a better understanding of what drug should be used.

Tuberculosis is comprised of very resilient bacteria, which can require medication to be taken for a much longer period than most bacteria.

For those who have latent TB, it can require four months of treatment in order to prevent it from becoming active TB.

Latent TB requires less drugs and time to prevent it from becoming active TB, normally one drug and 4-9 months of taking the medication.

On average, when diagnosed with active TB, people are on medications anywhere from 6 months, up to a year.

It is common for multiple TB drugs to be taken at once for active TB, as each drug can help beat the bacteria.

If you have a drug-resistant strain of TB, injectable medications may be used in conjunction with other TB medications, they may also be used for 20 – 30 months.

It is important to beware of symptoms that can come with the medication you may be on.

Taking multiple medications for an extended period of time can make it hard on your body, as many medications we take can damage our kidneys and liver in a large quantity.

Some side effects for TB medications include fever, jaundice (yellowing of the skin), loss of appetite, nausea, vomiting and dark urine.

Though these common side effects are not life threatening, it is important to share with your doctor if you do notice any symptoms.

Your doctor may also want to monitor your kidney and liver function throughout your treatment if you already have bad liver and kidneys. 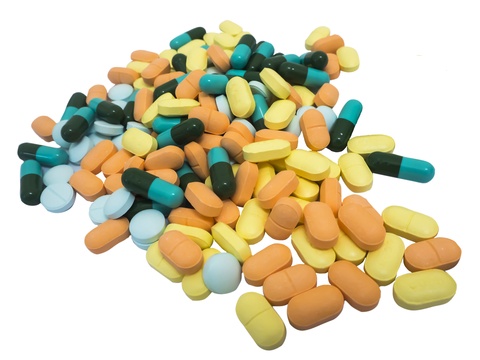 Following Through with Your Medications

It is very important to complete all medications prescribed by your doctor unless stated otherwise.

If you do not finish your medications correctly, you can risk not killing off all the bacteria and causing yourself to get sick all over again.

The bacteria can also become immune to the medications if taken incorrectly, and it can take stronger medications and a longer time for you to fully heal.

On occasion your doctor may recommend you do directly observed therapy (DOT), where a healthcare employee will administer the medication to make sure it is taken at the right times and is completed.

In some countries, a TB vaccination is administered to children to protect them against tuberculosis.

In the U.S., it is not a common vaccination to use, as it is not effective in adults and can lead to a positive skin test even if you do not have TB.

There is more success in the U.S. for those to not get vaccinated, but instead to treat the disease with medications if you are diagnosed with it.

If you ever notice the symptoms of TB, it is important to see your doctor and get tested and diagnosed correctly.

Tuberculosis is higher risk for those with weak or compromised immune systems, either from other illnesses or diseases.

Though TB is not contagious unless the lungs expel the bacteria (coughing, laughing, singing etc), keeping minimal physical contact is important to avoid spreading the bacteria.

Being diagnosed by a doctor will require one or more tests to determine if you have a false positive or are ill with TB.