National Diabetes Month: What You Need to Know 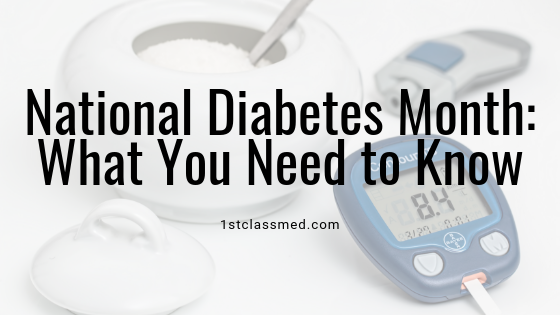 Diabetes is a disease where the body cannot produce or respond to the hormone insulin, this causes abnormal metabolism of carbohydrates and elevated levels of glucose in the blood.

Insulin is normally produced in the pancreas, but diabetes occurs when the pancreas cannot produce insulin, or it does not respond to insulin.

When the insulin cannot move glucose from the bloodstream to cells in the body, the levels can become very high in the blood.

These high levels of glucose in the blood can lead to stroke, kidney disease, vision problems, and nerve damage.

Normal levels of glucose are good, as it is what your brain, muscles and tissues use for energy.

Insulin in the body is used to help glucose (sugar) enter the cells, removing it from the bloodstream, but as blood sugar levels drop, the secretion of insulin slows down as well.

Glucose comes from two different locations in the body, food we eat and our liver, if we don’t eat enough food, our liver can break down glucose and keep our levels at a normal rate.

There are two types of diabetes, type one can be caused by your immune system destroying the cells in the pancreas that make insulin, type two is caused when the body slowly becomes resistant to insulin or the body stops producing it. 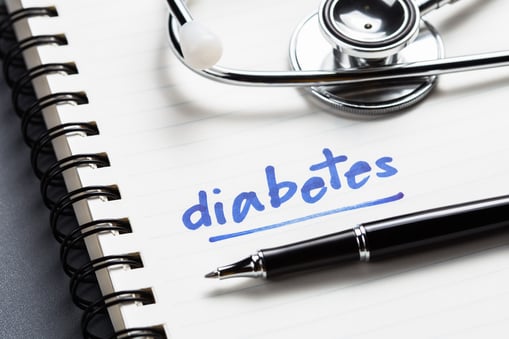 Type one diabetes used to be known as a juvenile disease, but anyone, at any age can get the disease.

It is believed that type one occurs due to the body’s immune system attacks the insulin-producing cells versus bacteria and viruses.

Genetics and viruses can also play a role in the development of type one diabetes.

Type one occurs when no insulin is found in the body, so the glucose begins to build up in the bloodstream and can cause very dangerous health complications.

Symptoms of Type One:

A1C Test: This test looks back two to three months to look at the average blood sugar level over that time. It measures blood sugar that is attached to oxygen-carrying proteins in red blood cells (hemoglobin), the more sugar in the blood, the higher the level of hemoglobin. If the hemoglobin is 6.5% or higher on two different tests, diabetes will most likely be the diagnosis.

Random Blood Sugar Test: A blood sample will be taken at random times and the test will be repeated a handful of time. No matter when you last ate, if the blood test comes over with blood sugar levels at or higher than 200 mg/dL it will suggest diabetes.

Fasting Blood Sugar Test: After an overnight fast, a blood sample will be taken and can help determine if the patient is diabetic. A blood sugar level of 99 mg/dL or less is normal, 100 mg/dL to 125 mg/dL is prediabetes and 126 mg/dL or higher (one two separate tests) is considered diabetes.

If diagnosed by one of the tests, your doctor will then figure out a good path for treatment, which can include: supplemental insulin, food intake counting (carbs, fat and protein), blood sugar monitoring, healthy food intake, and exercise.

It often occurs from being overweight and is slowly becoming more common in children as the childhood obesity rate increases.

Your body is either resistant to insulin or does not produce enough insulin for your body to maintain a normal blood glucose level.

The diagnosis tests for type two are very similar as type one, except one more test can be done for type two, oral glucose tolerance test.

Oral Glucose Tolerance Test: After a night of fasting, your blood sugar levels are tested and then you take a very sugary liquid drink and then blood sugar tests are done for the next two hours. If the levels are less than 140 mg/dL it is normal, if it is between 140 mg/dL and 199 mg/dL can mean prediabetes and anything over 200 mg/dL can indicate diabetes. 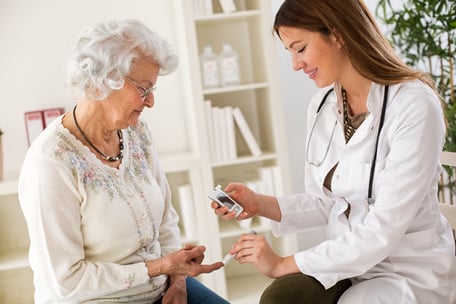 How to Prevent It:

Type one cannot be prevented, but obesity and family history is to blame for a type two diagnosis.

Type two occurs because of obesity, and occasionally because there is a family history for it, luckily there are ways to prevent it.

You risk of having diabetes increases when you have COPD, but it doesn’t mean it increases the risk of developing diabetes.

Those who are younger with COPD (45-55 yrs old) and have not smoked before are closely associated with diabetes, compared to those who are older have a reduction of diabetes in older-aged patients.

Low FEV1 and FCV levels are both associated with smoking, a common cause of COPD.

In recent years, the fact that COPD is an independent risk factor for lung cancer has slowly become more and more well-known.

It has been believed that for those with COPD and type two diabetes, may have a lower chance of getting lung cancer.

This doesn’t ring true for every case, as it is still possible for those with type two and COPD to develop lung cancer, but it can bring some relief to those with both conditions.

Though there have not been enough studies to determine how COPD and diabetes interact with each other there is clearly a connection linking the two conditions.

If you have COPD and have not developed diabetes, do your best to keep yourself in good health in order to prevent developing it.

If you have COPD and diabetes, follow all doctor’s instructions in order to maintain good health with the conditions you have.

By keeping yourself in the best health you can be in, you can help prevent your body from developing other conditions such as heart disease or cancers.