Make Your Own Luck this Friday the 13th!

It's Friday the 13th everyone! Don't walk under any ladders and if you spill the salt, be sure to throw it over your left shoulder. Where do these superstitions come from?

Many come from Early Christianity

A ladder leaning up against a building forms a triangle, which is a symbol of the trinity. People believed that walking underneath was a desecration.  If you should wander under one by accident, to undo the bad luck, walk back underneath while saying a prayer.

Spilling salt portending evil also has some biblical origins. At the last supper it is said that in the heated discussion that takes place, Judas spilled the salt. If you look at DaVinci's Last Supper you can indeed see that by Judas' arm there is a spilled salt shaker which led to spilled salt becoming a symbol for betrayal and lies.

The superstition for 13 comes into play here as well  as Jesus and his 12 disciples were seated at the table forever making it unlucky to seat 13 for dinner. If you spill the salt, gather it back up and throw it over your left shoulder to blind the devil who is waiting there to whisper in your ear. 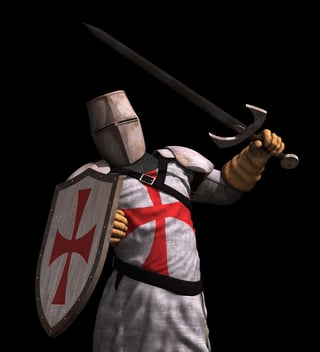 Yes Friday the 13th is an 80's slasher flick that has become synonymous with today but the origin of Friday the 13th being an unlucky day has it's origins way back on Friday, October 13, 1307 and has to do with The Knights Templar, or The Order of the Temple of Solomon, as they called themselves.

The knights came to prominence after the Christians recovered Jerusalem during the first crusade in 1099. Many Christians began making pilgrimages to various sacred sites in that area. Along the way they were often victimized by bandits. In 1119 a monastic order of knights was created to protect these pilgrims. These knights were given quarters by King Baldwin on the Temple Mount, which was built on the Temple of Solomon and thus the Order of the Temple of Solomon, was born.

Rich pilgrims often gifted the knights with treasure, horses, or other expensive gifts to show their appreciation for the knights assuring their safe passage. As a result the Templars grew to be one of the richest and most powerful orders.

Their financial holdings were so large they were the creators of  the modern form of banking whose principles we still used today. They created branch banking and credit cards of sorts. Back then you couldn't travel to your destination and find the nearest ATM to draw out funds to use on your vacation. You had to travel with your money with you making yourself a target for robbers. The Templars realized they couldn't watch every single pilgrim along the route personally so instead they eliminated the risk by making sure they had less gold or currency to take, making them less attractive targets.

They began issuing letters of credit, the first debit card, you might say. A pilgrim could deposit their currency with the Templars where they lived. The Templars would give them a letter stating the amount they had deposited. Upon arrival at their destination, they would go to the Templars in that area and receive the same amount of currency to be used until it was time to travel back home. For this the Templars charged a small transaction fee, of course.

From donations and their banking ventures their coffers were filled to overflowing. With it they bought large tracts of land, vineyards, farmland, and their own fleet of ships for importing and exporting. You could say that they were the world's first bank as well as it's first multinational corporation. With all that clout King Philip IV of France began to see the Templars as a threat, and honestly he coveted their wealth.

In the mid 12th century the Christian forces spent a lot of time warring with one another while Muslim forces were more united under Saladin. As a result many holy sites were lost during this time. Because of that, public opinion of the Templars had greatly diminished and Philip saw his chance to make a move to eliminate the order.  He sent letters to his forces at every corner of his realm and ordered that they be opened at dawn on October 13th and his orders carried out right away.

The letters stated that all Templars should be immediately arrested. His letter called the Templars "enemies of faith" and accused the Templars of idol worship, indecent behavior, fraud, financial corruption, and numerous other charges. The Templars were arrested, some were killed, and naturally their assets were seized. This was the first unlucky catastrophe of Friday the 13th.

So if you're a Templar Knight, today is unlucky for sure, but for the rest of us we can pet a black cat,or toss out a broken mirror and get another one with no worries. Let's look at 13 things that respiratory patients can do to make their own luck and take disease management into their own hands!

1. Stick to your Medication Regimen

Many of the medications prescribed require time to build up in your system to be effective. Skipping doses makes them less effective over time. If you're feeling better it doesn't mean that you should skip taking your medicine, it means that the medicine is working and you should keep taking it to maintain levels in your system.

2. Stay as Active as Possible

Increasingly sedentary behavior will speed disease progression like nothing else. Breathing requires muscle tone to accomplish, so if you begin losing muscle tone it becomes harder to breathe, causing you to me more sedentary, etc. in a vicious circle. No one expects you to do a triathlon, just walk the dog, rake the leaves, or there are even exercises you can do from a chair! Do what you can, as much as you can.

Easy one! Cut out sugary drinks and caffeine and drink water. Your lungs are about 83% water so anytime you are dehydrated and your body needs water to perform a function like digesting food, lungs are a good candidate to be drawn from which means it's harder for them to do their job. So drink! Water is great and if it's extra warm out, or you're exerting yourself, drink juice or sports drinks.

This probably should have been up at number 1. It is the single most important thing that you can do for your health! This is Stoptober so there is no reason to wait until New Year's resolution time! Learn about tobacco addiction and use that knowledge to beat this habit for good. Your future quality of life absolutely depends on it.

Pulmonary rehab is a combination of exercise, dietary education, and breathing techniques. Especially if you have been just diagnosed with a serious lung condition, it's imperative that you acquire the tools that Pulmonary Rehabilitation provides to better manage your disease.

Another easy one! Avoiding illness is essential for staving off exacerbations that may land you in the hospital. A simple cold or respiratory infection that is negligible for a healthy person, can be disastrous for someone with COPD or other lung ailment. Yes, you should get a flu shot but that doesn't prevent every illness but washing hands frequently will prevent many of them.

A positive attitude will add years to everyone's life but is especially necessary for those with a lung condition. No one would tell you that this is an easy journey but appreciating every day and still continuing to find joy in the things you've always enjoyed will carry you through. People with COPD are living longer and fuller lives as more is understood about treatment. There will be good days and bad, but try to stay focused on the good.

8. Add More Vegetables to Your Diet

The link between health and diet is well documented. Find ways to add more vegetables to your diet to give your body more vitamins and minerals to use as fuel to keep you healthy. The Mediterranean Diet might give you some lean, healthy recipe ideas that are healthy and also tasty!

9. Load up on Antioxidants

There is much data to suggest that there is an increased oxidative burden present in those battling COPD. To help your body combat this, load up on foods that are rich in antioxidants. They will help with your lung condition and keep you healthier overall. The good news is that they are yummy as well!

By learning what your specific triggers are you will be able to avoid exacerbation. Avoiding flareups is the most effective way to feel better and reduce the impact of COPD on your life. Keep your home as dust and smoke free as possible and use air filters if you can. Avoid outdoor activities during high pollution or high pollen times. If you have a symptom flareup try to ascertain it's cause so that you can avoid it in future.

Night time is your body's time to rejuvenate itself. If you suffer from congestive heart problems or breathing issues, you may not be getting the sleep you need. Medications also sometimes effect sleep negatively. If you are having trouble sleeping, speak to your doctor, it may be something as easy as changing your sleeping position, or rescheduling medication times. Nap during the day if you need to but make sure you are getting plenty of sleep.

Maintaining lung elasticity is essential for slowing COPD progression and maintaining quality of life. Breathing exercises can be done anywhere and are specifically focused on maintaining lung function. Do them daily, and as often as possible.

Often those battling a serious illness find themselves increasingly isolated. Sometimes friends may stop calling or coming by if they find out you are ill. Usually it's because they don't want to bother you if you're not feeling well or they just don't know what to say, not because they don't care. Reach out to those friends and let them know that you'd still like to get together. Suggest an activity that you feel up to doing and they will probably be happy to accomodate. Some who are newly on oxygen equipment feel self conscious going out in public with it. Don't! It's an apparatus that you need for your health and most likely not as many people even notice it as you think. Make an effort to reach out to people who are also going through the same things. Your pulmonary rehab may have a support group or you can reach out online to a Facebook group such as ours, where patients can lend support and teach others what they've learned about managing their disease.

Wishing you all the best of luck on this Friday the 13th!