Woman on Supplemental Oxygen Nearly Burned to Death From Smoking 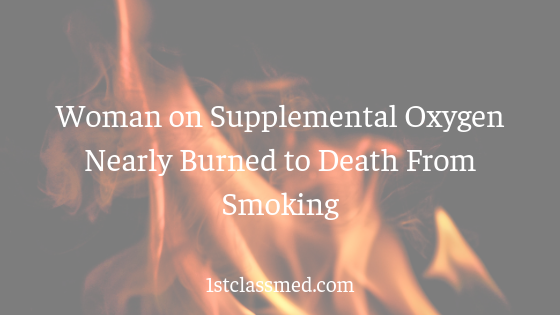 Earlier this week, a rescue story about a woman nearly burning to death from smoking while using supplemental oxygen surfaced.

A 13-year old young man, Timothy Iwan, saved his grandmother from nearly burning to death while she was using supplemental oxygen and smoking.

The woman, Dianne Bungo, was smoking in her Ohio home kitchen while using her supplemental oxygen, which then cause a fire to break out.

Dianne was using cannula to receive her oxygen, which caught fire and was headed down toward her oxygen tank.

Timothy's mom was not home at the time, as she ran out to pick up his siblings from school, she was gone less than 20 minutes.

Timothy and Dianne were the only two home at the time, when Timothy heard Dianne yelling for help.

He ran downstairs to her and realized the severity of the situation.

Timothy was quick to unplug his grandmothers oxygen machine from the outlet and removed the cannula from her face.

He then ran to the sink to fill a bowl with water and started to pour it on his grandmother to stop the fire.

Timothy said his grandmothers clothing was on fire as well, and he was rushing to put the fire out.

Not only did this young mans’ quick thinking save his grandmother's life, it saved his home as well.

You can read the full article and watch the interview with Timothy here.

We often reiterate on our website the importance of avoiding smoke and other fire hazards when using supplemental oxygen of any form.

This is proof of how dangerous it can be to smoke while using oxygen, even if the risk is low, it is still a risk and can happen to anyone.

The decision to smoke while using oxygen could have left Dianne's family without her, and their home.