Emphysema: Everything You Need To Know 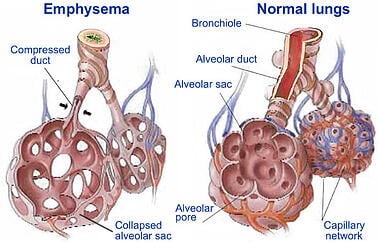 Chronic obstructive pulmonary disease (COPD) is a umbrella term that includes emphysema. Emphysema is a progressive lung condition that affects the tiny air sacs in the lungs, alveoli, and causes them to fill with air. Over time these air sacs expand causing them to burst or become damaged, which causes the lungs to form scar tissues. These scar tissues will begin to affect the patients breathing ability by making them progressively short of breath, which is a side affect known as dyspnea. Eventually the alveoli turn into swollen air pockets referred to as bullae, eventually causing less and less surface area for the lungs resulting in less oxygen entering into the bloodstream. When the alveoli becomes damaged so do the tiny fibers that hold open the airways leading to the alveoli, causing them to collapse and trap air every time the patient expels air. The number one cause of emphysema is long-term cigarette use.

Cause and Effects of Emphysema

Signs and Symptoms of Emphysema

What makes emphysema so tricky and difficult to diagnose at an early stage is the simple fact that symptoms may go unnoticed for many months, and even up to years. As emphysema progresses and further damage is done to the lungs, patients will begin to feel shortness of breath which is referred to as dyspnea. At the beginning stages of emphysema dyspnea will occur during times of physical activity, and gradually the disease will get worse and worse eventually causing dyspnea during times of rest or little physical activity. The dyspnea can eventually take a toll on patients to the point where eating is difficult, which will lead to a reduced appetite and weight loss. Other common signs and symptoms of emphysema include:

What Leads to Emphysema

Long-term regular cigarette use is the #1 CAUSE of emphysema! Burning a cigarette releases 4,000 known chemicals into the surrounding areas, and many of those chemicals are carcinogenic (cancer causing). Those carcinogenic chemicals are the reason why 5 out of every 6 lung disease patients were once long-time or still are smokers. However cigarette smoke is not the only cause of emphysema, excess exposure to air pollution, factory fumes, dust, or burning wood are just a few other common irritants that can leave patients susceptible for developing emphysema. In very few cases emphysema can be attributed to genetics, which is known as Alpha-1-antitrypsin deficiency. This is when there is a deficiency in the proteins that protect the elastic structures in the lungs. Other causes for emphysema include:

The damage that has already been done to the lungs cannot be reversed, but with treatment options, diet changes, and exercise emphysema will be more easily managed and the overall quality of life will improve. Here are some of the most common treatment options:

If you are experiencing any of the previous symptoms and have been a long time smoker, then speak with your doctor about getting tested for emphysema.