A Connection Between the Gut and the Lungs 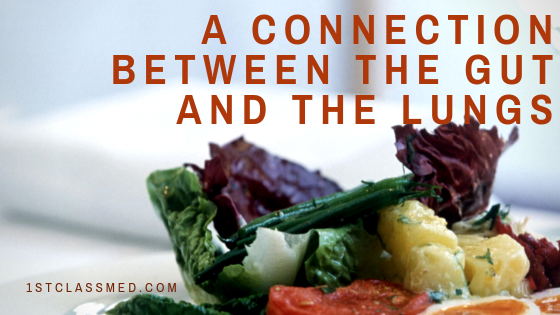 September 25th 2019 is World Lung Day (WLD), which makes it important to address issues with the lungs, such as COPD (which 65 million people suffer from).

This WLD the goal is to "leave no one behind. On #WorldLungDay call for healthy lungs for all."

What many do not know is that our lungs and gut have a connection that can lead to inflammation in both your intestines and your lungs.

In the past few years, more research has come out about how our gut and our lungs are linked together.

Previously believed to be two different functioning organs with no apparent connection, our gut and our lungs surprised everyone as there seemed to be a connection.

But how are they connected? What links our lungs to our gut?

IBD or inflammatory bowel disease is a broad term for multiple diseases that can affect the intestines, causing them to become red and inflamed.

Very common types of IBD are ulcerative colitis (UC) and Crohn’s disease (which is common in both the small and large intestines but can occur in any part of the digestive tract).

Common risk factors include age (commonly diagnosed before 30), family history, cigarette smoking, nonsteroidal anti-inflammatory medication (NSAIDS, such as ibuprofen and asprin) and where you live.

Tests can be done to better assess your disease and see what route of medication can be taken in order to ease any symptoms.

These tests may be used in conjunction with each other to help your doctor better assess your symptoms and hopefully diagnose a cause of your symptoms.

In order to treat IBD, it is important to know that no medication can cure the disease, but it is possible to subdue symptoms of it.

Most commonly used, anti-inflammatory drugs can help with inflammation in the colon and intestines.

Your doctor may also prescribe immune system suppressors, so your immune system response will not trigger your intestinal lining to react to what you ate.

Antibiotics may be used in order to prevent infection if that is a current concern of your doctor.

Acetaminophen may be recommended for symptom pain as ibuprofen and aspirin can both worsen your disease and symptoms.

A diet change may be recommended by your doctor as well, as foods you eat may cause a blockage in your intestines and prevent your body from getting the nutrients it needs.

Surgery tends to be a more last resort option, but is it possible depending on the severity of your disease.

But IBD and COPD?

It has been studied that IDB (inflammatory bowel disease) patients rapidly develop “progressive respiratory symptoms” after a colectomy.

A colectomy is the removal of part or all of your colon (large intestines), which is a long organ at the end of your digestive tract.

The study connected our gut and our lungs to IBD, causing inflammation to both the intestines and the lungs.

The pulmonary effects are more pronounced in those with IBD that is active compared to those in remission.

Currently, research has found that inflammation can shift from the gastrointestinal tract to the airways, but they have yet to figure out why.

There are theories that we have many cells in each organ, but some of these cells are believed to communicate throughout the body.

Studies began back in 1976, observing six people who were diagnosed with chronic bronchopulmonary disease after “onset of nonspecific inflammatory disease of the colon”.

Since that was caught back in 1976 there have been many more cases where pulmonary complications have occurred more often in IBD (inflammatory bowel disease).

Another study in Canada determined that those with asthma and COPD have a higher risk of inflammatory bowel disease compared to the general population.

What Does This Mean?

Though doctors, scientists and researchers have yet to discover how inflammation in our bowels and lungs are connected, that doesn’t mean there won’t be answers in our future.

A connection was only discovered back in 1976, not giving research enough time to find a cause just yet.

Currently there are a few shared risk factors that can play a role in both your gut and your lungs, such as smoking and your family history.

An abnormal immune system response to bacteria can occur in both the lungs and gut, which can also play a role in the connection.

It is possible to lower your risk of IBD by quitting smoking, eating a nutritious diet and making sure to exercise as often as your doctor suggests.

By recognizing there may be a connection between respiratory conditions and IBD, future patients of COPD can be aware of a risk of bowel diseases.

What Should I Do?

If you have any concerns with your risk of COPD and IBD, speaking with your doctor and getting tests done can help calm your nerves or even give you results.

Your regular doctor (general practitioner) may end up referring you to a specialist, both a gastroenterologist and a respiratory specialist.

The gastroenterologist may be able to figure out specifically what is going on in your gut, and that can then be linked to your respiratory diseases if you have any.

It is important to contact your doctor and see if your symptoms align with a possible disease or illness and if you should make an appointment.

Though there is no answer to why, there has been a link between our lungs and our gut, which has caused further investigation by researchers.

If you notice any stomach issues, meet with your doctor or GI to further discuss your gut health.