We talk a lot about COPD and heart ailments in relation to oxygen use but not every oxygen user has lung or heart problems.  We recently met one very special oxygen user whose need for oxygen stems from a liver problem.

Six months ago Ryan was a regular 10 year old.  His mom, Phyllis, says he was on the run from morning until night and was active in sports, especially gymnastics.  Ryan, his sister, Megan, and his parents were on a vacation at the end of the summer.  Upon returning to their home in Grand Junction, Colorado, Ryan began complaining of fatigue which his mom chalked up to travel exhaustion at first.  But after a couple of days of Ryan sleeping for 14 hours, mom knew that there was something wrong with this boy who is usually up at the crack of dawn and full of energy.  On the ride to the doctor’s office his fingers and lips began to turn blue.  Upon arrival his oxygen levels were dangerously low, in the 70’s while normal oxygen saturation levels should be between 95-100%.

Ryan had been born with a hole in his heart and two heart murmurs.  While his physicians were aware of these issues, they had not been causing him any problems.  His pulmonologist immediately ordered heart surgery to adjust the blood flow pumping through his heart as he believed this is what was causing the drop in his oxygen levels.  In preparation for surgery Ryan had a full work up which included an ultrasound and CT scan.  Upon analyzing the ultrasound they found that he had Cirrhosis.  He was put on oxygen immediately and is currently using 3 LPM continuous.  With that oxygen flow, Ryan’s mom is changing his tanks out several times a day.  Traveling with oxygen for someone on that flow rate can be difficult.  The logistics of having that many tanks around, coupled with the fact that tanks are prohibited on airplanes makes traveling by plane impossible

That’s why Ryan’s mom gave us a call.  United Airlines Fantasy Flight was going to take 60 patients and families from Denver to the North Pole.  No, not that north pole, the one in Colorado Springs where you can visit Santa’s workshop and meet his reindeer.  In order for Ryan, Phyllis and Megan to go on the trip, Ryan had to find another way to get oxygen.

On Friday the family came to 1st Class Medical’s Denver office where we were happy to supply him with a SeQual Eclipse 5 for the weekend.  It has plenty of power to provide him with proper saturation, and it’s mobile enough for him to roll around at the airport and all day at Santa’s Workshop.  It also has plenty of battery power as well as a car and wall charger so he could plug in to recharge if necessary.  Before he left the office Ryan also said that he often had bloody noses because the oxygen made the inside of his nose dry.  The SeQual Eclipse 5 does have a humidifier attachment available so we fixed him up with one before he left.

Early Saturday morning, Ryan, his family, and several others from the Ronald McDonald House flew to Colorado Springs and spent the day with Santa, enjoyed the theme park, and on the way home, they took a joy ride over Kansas.  Ryan got to sit in the cockpit on his first ever plane ride and took plenty of pictures to share with us of his fun day. 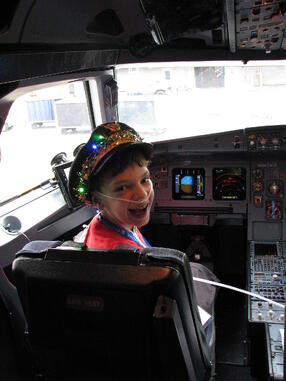 This is the 18th year of United’s Fantasy Flight where kids with health challenges from all over the country get to fly to the North Pole for a day.  In addition to Santa’s workshop, there are miniature trains, an antique carousel, fun rides, a petting zoo, shops, and where else can you shake hands with an elf?

Each child on the Fantasy Flight received a gift bag which Santa gave the okay to open early.  Ryan told us he got some board games, an awesome remote control car, and some mittens for the coming winter.  Even sister, Megan got some winter accessories as well as a tablet.

This coming Wednesday Ryan will have exploratory surgery as the first step in the liver transplant process. The liver performs over 500 vital functions within the body.  It may seem odd that liver damage can impair oxygen saturation but the liver helps in the breakdown of hemoglobin which is the oxygen carrying component in blood.  As this process is hindered, it can adversely affect a patient’s oxygen levels.  The good news is that liver cells can regenerate very quickly so generally, a partial section of another person’s healthy liver is implanted in place of the diseased liver.  Phyllis tells us that her extended family is huge so the chances of finding a good match are extremely high.  We certainly wish Ryan well and are looking forward to frequent updates about his improving health which he has promised to deliver.