5 Things Portable Oxygen Concentrators Can Do That Tanks Cannot 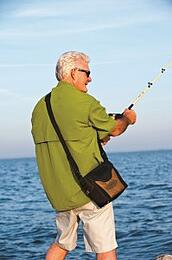 1) Produce Their Own Oxygen

Oxygen tanks and liquid oxygen are pressurized canisters with a maximum capacity. Once the oxygen tank is depleted it needs to be refilled by the patient or their oxygen supplier. This isn't bad when you receive your new tanks, but when you are down to your last tank or two, waiting on the oxygen supply company to refill your tanks can be stressful and annoying. Portable oxygen concentrators never have to be refilled because they produce their own medical grade oxygen. Portable oxygen concentrators like the SeQual eQuinox draw in the air surrounding the unit and send it through a filtration process to produce medical grade oxygen. As long as you have battery life remaining or can plug the machine into an outlet you have an unlimited supply of oxygen.

2) Can Be Transported Easily

Transporting oxygen tanks is a hassle. Carrying one tank with you isn't the bad part. It is having to bring extra tanks with you in case you run out of oxygen or get stuck somewhere. Bringing extra tanks can be a safety hazard if they are not properly stored. Not to mention when you get to your destination you may have to run back out to your car for the extra tank or you may have to carry the extra tank with you. Portable oxygen concentrators are easily transported because the produce their own oxygen and come equipped with a custom carrying case, travel cart, or both. With a portable oxygen machine you don't have to worry about bringing extra tanks or running to the car for more oxygen.

3) Can Be Brought On An Airplane

4) Can Be Recharged On The Go

Portable oxygen concentrators are battery and electrical operated devices. They come with AC and DC power supplies that allow patients to power their machine and recharge their batteries simultaneously. Whether the patient is in the car or at a dinner party they will be able to plug their machine in to recharge their batteries. Most portable oxygen concentrators will operate and either recharge the battery or maintain the batteries charge while plugged into the DC power supply. Oxygen tanks and liquid oxygen cylinders do not have the ability to recharge or refill on the go. Once they have fully depleted they need to be refilled by the oxygen supply company.

5) Alarm You If Something Is Wrong

Every FAA and FDA approved portable oxygen concentrator comes equipped with audible and visual alarms that notify the patient if something is wrong. Some of the general alarms for portable oxygen concentrators include, but are not limited to; no breath detected, low O2 purity, low battery life, unit malfunction, and unit needs servicing. If the oxygen concentrator does alarm you will hear an audible beeping noise and you will see some indication light blinking to inform you of the issue. Oxygen tanks and liquid oxygen do not have the technology to alarm you if something were to happen.